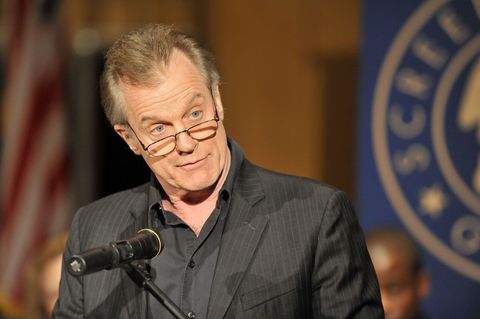 In 2012, Stephen Collins admitted to child molestation in a tape TMZ obtained in October; today, the 7th Heaven actor released a statement to People in which he confirms he was involved in inappropriate sexual contact with three female minors.

The 67-year-old, who has been under investigation by Los Angeles sheriff's detectives since the first confession emerged, told the magazine there were three underage victims between 1973 and 1994.

"Forty years ago, I did something terribly wrong that I deeply regret," Collins said. "I have been working to atone for it ever since. I've decided to address these issues publicly because two months ago, various news organizations published a recording made by my then-wife, Faye Grant, during a confidential marriage therapy session in January, 2012. This session was recorded without the therapist's or my knowledge or consent."

Collins' full statement will run in the next issue of People, which hits newsstands Dec. 19; on the same day, his interview with Katie Couric will air on Yahoo! and ABC's 20/20.

Chelsea Peng I'm Chelsea Peng, the assistant editor at MarieClaire.com.
This content is created and maintained by a third party, and imported onto this page to help users provide their email addresses. You may be able to find more information about this and similar content at piano.io
Advertisement - Continue Reading Below
More From Celebrity
Celebs Reveal Their Worst On-Screen Kisses
Duchess Kate Looks Stunning in a Pink Suit
Advertisement - Continue Reading Below
Diana's Friend Shared a Rare Pic of Her on a Yacht
John Shared a Cute Pic of Chrissy, Luna, and Miles
The Royal Family Will Be Split Up at Christmas
Courteney Cox Recreated Her Iconic Turkey Dance
Royals Knew of Meghan's Miscarriage Before Op-Ed
Royals Feel "Great Sadness" for Meghan and Harry
How Celebs Are Celebrating Thanksgiving This Year
Kristen Stewart Is "Protective" of Princess Diana