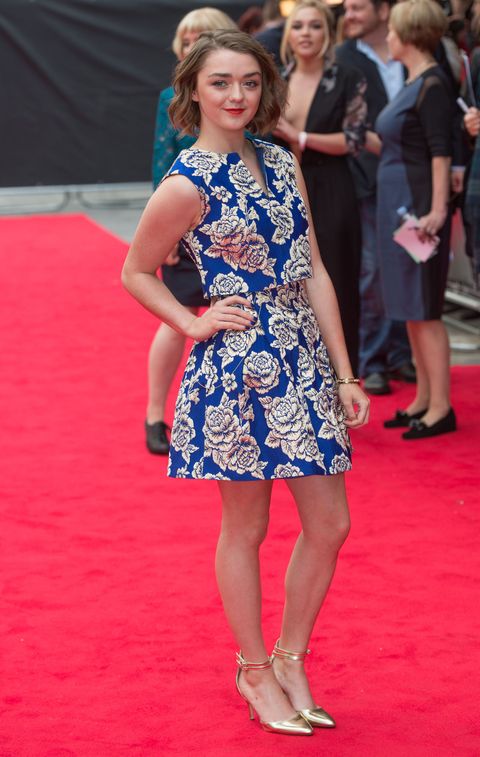 Now that you've got Liam Neeson's Taken phone call down pat, here's another enemy-intimidation quote to add to your repertoire, courtesy of Maisie Williams.

The Game of Thrones actress plays the lead in the made-for-TV movie Cyberbully, which premiered Thursday in the UK and involves a creepy computerized voice that teaches wayward teenagers about Internet safety. While she's taken precautions against becoming another celebrity-hacking victim, the iCloud-less 17-year-old says she simply brushes off any social-media negativity.

"I get trolled just as much as anyone," Williams says in an interview with Grazia. "I try not to take the internet too seriously. The internet's been branded this place of hate, but there's so much more to it." (Hear hear!)

Her Westerosian alter ego, on the other hand, wouldn't be so chill if her private photos were stolen and then distributed like photocopies of Regina George's burn book.

"I don't think Arya would have the best approach," she says. "She'd be finding out their IP addresses and paying them a little visit."

Here, the trailer for her new flick:

Mark Your Calendars: 'Game of Thrones' Season 5 Gets a Premiere Date

Chelsea Peng I'm Chelsea Peng, the assistant editor at MarieClaire.com.
This content is created and maintained by a third party, and imported onto this page to help users provide their email addresses. You may be able to find more information about this and similar content at piano.io
Advertisement - Continue Reading Below
More From Celebrity
Dolly Parton On the #FreeBritney Movement
Will & Kate Are Nervous About George's Future
Advertisement - Continue Reading Below
George Won't Be Forced to Go to Boarding School
Diana Would Have Written a Memoir Too, Friend Says
A Slice of Diana's Actual Wedding Cake Is For Sale
Matt Damon Trolled Ben Affleck and Jennifer Lopez
This Old Video of the Queen Saying "Nah" Is LOL
Diana Had a Secret Message on Her Wedding Shoes
Will's Friends Made "Jibes" About Kate's Mom
William Will Suffer "Worst" from Harry's Memoir