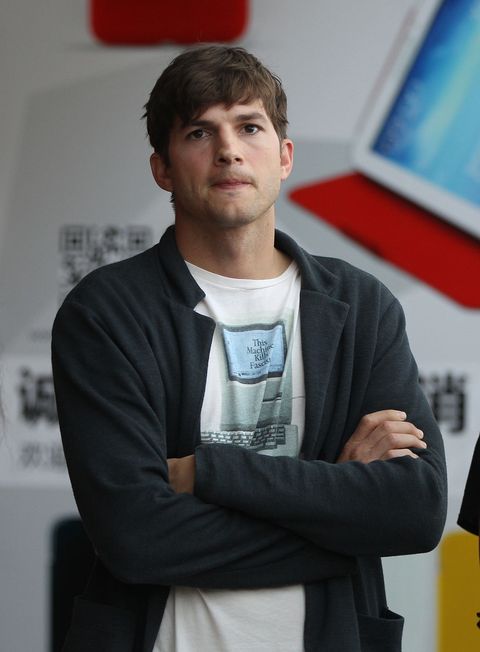 Ashton Kutcher could be set to give evidence against the man accused in the 2001 stabbing death of his ex-girlfriend Ashley Ellerin.

According to court documents published in the National Enquirer, the actor arrived at Ellerin's apartment Feb. 21, 2001 and left soon after when she didn't come to the door. He then claims to have looked through the window to see a pool of liquid on the floor, which he mistook for spilled red wine.

Air-conditioning repairman Michael Gargiulo will stand trial for stabbing Ellerin 47 times as she showered. He is also accused of murdering four other women—though up to a dozen victims are suspected—beginning in 1993.

Kutcher will reportedly be called as a witness to help the prosecution establish the time of death. Meanwhile, we will never open our doors again ever.

Mila Kunis and Ashton Kutcher Release the First Pics of Their Baby, Prove They Have Top-Notch Genes

Did Ashton Kutcher and Mila Kunis Get Secret-Married?

Ashton Kutcher and Mila Kunis Throughout the Years

Chelsea Peng I'm Chelsea Peng, the assistant editor at MarieClaire.com.
This content is created and maintained by a third party, and imported onto this page to help users provide their email addresses. You may be able to find more information about this and similar content at piano.io
Advertisement - Continue Reading Below
More From Celebrity
Jennifer Lopez and Ben Affleck: Everything We Know
Harry & Oprah's Mental Health Doc Has a Title
Advertisement - Continue Reading Below
Serena Williams Might Miss the Tokyo Olympics
Jennifer and Ben Have "Unreal" Chemistry Together
The Sussexes Marked Archie's Bday in a Lovely Way
Queen's Cousin Accused of Selling Access to Putin
Meghan Wore a Meaningful Necklace for Vax Live
How Celebrities Are Celebrating Mother's Day 2021
Gabrielle and Kaavia's Mother's Day Pic is So Cute
Ben Affleck's Moving Tribute to Jennifer Garner