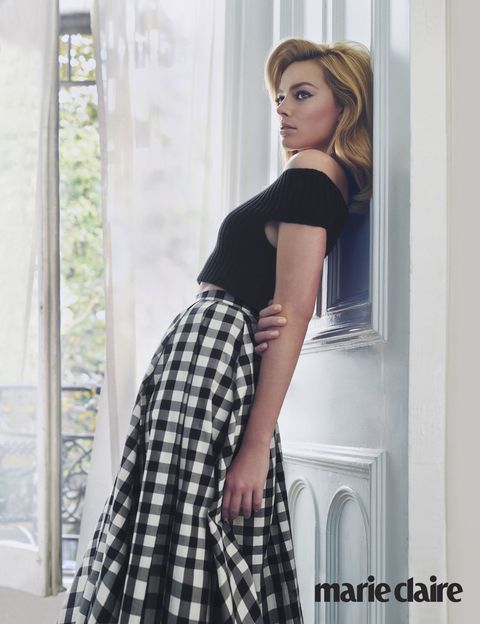 For a while there, it was fashionable to complain that there are no real movie stars anymore, that Hollywood just doesn't make them the way it used to. Then, filmgoers woke up on Christmas morning 2013, and there was Margot Robbie.

Offering up a transfixing big-screen debut as Naomi Lapaglia in The Wolf of Wall Street, the 24-year-old Australian played everything from coquettish to madcap to totally unhinged—in the thickest New York accent this side of the Pulaski Skyway, no less, and while periodically nude. Not only did she hold her own opposite Leonardo DiCaprio, she damn near stole the movie with a career-defining performance that summoned the glamorous ghosts of Grace Kelly and Kim Novak. "Something about her feels timeless," notes John Requa, who, with his writing-directing partner Glenn Ficarra, cast her opposite Will Smith in their upcoming crime caper Focus, out February 27. "We haven't had a star like this in a long time."

After all, it's not every actor who can deliver a line like "Mommy's just so sick and tired of wearing panties..." and walk away with her dignity intact. "With a lot of things in acting," Robbie says of playing Naomi, "if you do it  half-assed, it just looks stupid. So I was like, I'm going to go all out and own it."

On her look: "I know that my look is more 'toothpaste model' as opposed to artsy, which sucks because I can play those roles."

On her love life: "I am officially off the market…I made a conscious decision not to date actors, but not because I hate actors. That's a nasty generalization to make, and that's not the case…People take such an interest in your love life when you have a profile that it puts a lot of stress on a relationship. So two people with profiles, I figure it's just double the amount of scrutiny, and I'd like to avoid that at all costs."

Beau Grealy
On her bad habits: "When I eat, I have to chop up everything on the plate and stir it all together. It devastates my mom. Everyone at the table is like, 'That looks like cat vomit.' And I stir my Coke with a spoon until it's flat."
On attending an elite private school though money was scarce: "It was weird because a lot of my friends were very wealthy. It was interesting to see what you can have in life and know what it was like not to have it. It makes you very ambitious. It seemed horrible at the time, but I'm grateful I had it that way, because I knew what I wanted to achieve."
On her attitude: "I'm so overly optimistic to a fault, but this job has made me start questioning people's motives…I have never been a cynical person. I'd rather trust nine people and have the 10th one stab me in the back. I'd take that fall in order to have those nine friendships or working relationships instead of having none. That's not living."
Beau Grealy
Read the full interview and see all the photos in the March issue of Marie Claire, on newsstands February 17. Need more to hold you over? Go behind the scenes of our cover shoot right here:
This content is created and maintained by a third party, and imported onto this page to help users provide their email addresses. You may be able to find more information about this and similar content at piano.io
Advertisement - Continue Reading Below
More From Celebrity
The Best TV and Movie Wedding Dresses of All Time
47 'Friends' Facts Every Superfan Should Know
Advertisement - Continue Reading Below
40 Celeb Exes Who Worked Together After a Breakup
35 Unforgettable Royal Wedding Scandals
The 50 Most Popular Episodes of ‘Friends,’ Ranked
Iconic Party Photos From the Past
40 Celebrity Sisters Who Look So Much Alike
40 Rare Photos of Grace Kelly Through the Years