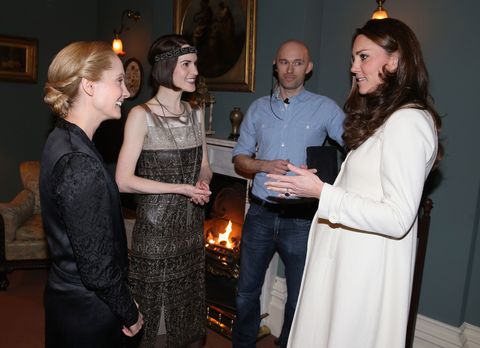 Update, 9/21: MR. CARSON. Dude's a staunch monarchist on Downton Abbey, but IRL, he has no problem going "Yeah, we kind of wanted the Duchess of Cambridge to leave our workplace but she wouldn't." (Isn't he the best?)

"She's a big fan of the show," he said at a pre-Emmys tea party Saturday. "I don't think she'd been on a film set before or a TV set so she was intrigued by how different it looked on the screen and in reality. She overstayed. She stayed long. She was having such a good time."

Other reports describe Kate as "normal" (Lady Edith) and comfortable with leading the conversation when everyone got too shy to talk to her about anything but chocolate and craft services (Mrs. Patmore and Lady Edith again). But did she get any intel about Mary and Henry "Start Your Engines" Talbot, though? LOL NO, said Julian Fellowes. Figures.

Original story, 3/5: Kate Middleton, princess, style icon, and mother to one of the cutest babies alive, is continuing to live the dream of most folks. The Duchess of Cambridge will tour the London set of Downton Abbey next Thursday, March 12, People reports. During the visit to Ealing Studios, where the show's interior scenes are shot, she'll meet the show's creator and cast, plus watch a scene being filmed in the servants' quarters (a duchess in the servants' quarters? Carson will die). No official word on who will be in the scene yet, but we bet Lady Mary (Michelle Dockery) and the Dowager Countess (Maggie Smith) will be some part of Kate's visit, because, well, can you imagine the photos?!

Middleton, a noted fan of the show, will receive V.I.P. treatment at the studio, of course. She'll see the scene and then watch a second take of the show, as producers would watch it, in the "video village," and then attend a reception where she'll mingle with the cast, writers, and producers. Perhaps she could suggest a few story ideas? (Prince George cameo, please. PLEASE.)

View Kensington Palace's behind-the-scenes snaps from the visit, below:

She poses for a portrait with the creator, producers, and cast of Downton Abbey.

Carson (Jim Carter) being just as classy in front of royalty as you'd expect.

Bates (Brendan Coyle) making our hearts melt, as per usual.