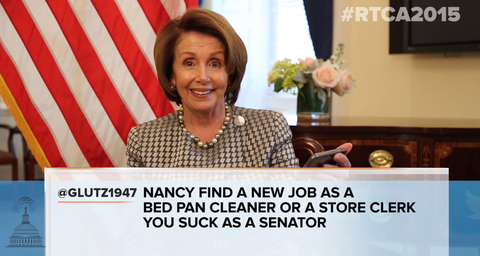 Fine, maybe Chloë Grace Moretz, but other than that, no one else even comes close to the swagger-y comeback machine that is Nancy "Gives Zero F*cks" Pelosi in this (non-late-night) edition of Mean Tweets.

For the 2015 Radio and Television Correspondents' Association Dinner, NBC News took inspiration from Jimmy Kimmel and persuaded Pelosi, John Boehner, and a few other members of Congress to read random insults care of Twitter users. There's the requisite Oompa Loompa comparison, a not-too-far-from-the-truth Back to the Future reference, and quite a bit of teeth gritting. But no matter, because when Nancy Pelosi fires back, there's no getting back up.

Watch the video below.

Obama Reads Mean Tweets About Himself on 'Jimmy Kimmel Live'