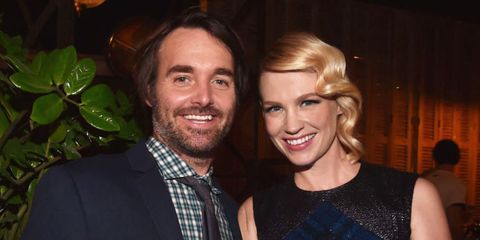 There's probably an esoterically worded study about this somewhere, but we don't need some eggheads to tell us why actors playing romantic interests often date each other, right? (Something about how acting like you like someone all day makes you actually like-like them, fake it 'til you make it, blah blah.)

So in accordance with the Theory of Costar Coupling, January Jones and Will Forte, leads on Fox's The Last Man on Earth, were meant to happen all along. 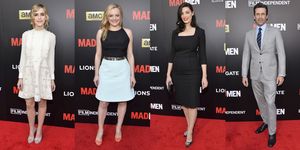 The Best Looks from the Last-Ever 'Mad Men' Press Tour

People reports the two are in fact dating, which, we hypothesize, might have something to do with the way Forte's character gazes at Jones's character longingly on the show. Like so.

And (pretend) made out:

Conclusion: The rumor's truthfulness is quite high, and they probably are a real-life couple. Q.E.D.

Robert Pattinson Gave FKA Twigs an Actual Engagement Ring This Time, Not Just a Promise One

Lady Gaga and Taylor Kinney Are Getting Married