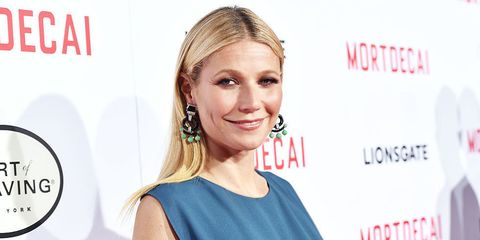 That Gwyneth Paltrow always has something up her sleeve, and if the success of her lifestyle website GOOP is any indication, she's about to become a fixture on the nightclub scene.

The Oscar-winning actress and her business partner Gary Landesberg have purchased Flynt's Hustler Hollywood, a former sex shop on Sunset Boulevard in L.A. that they plan to turn into a high-end restaurant and nightclub.

"The building is in escrow and the Hustler Hollywood store will be moving to a new location in Hollywood later this year," said Flynt's rep, Arthur Sando, in a statement. "The current location will remain open until that time."

According to TMZ, the joint will be super exclusive with a dress code and modeled after clubs in London and Aspen with expensive membership fees.

We imagine Paltrow will be taking notes from her good friend Jay-Z who launched the 40/40 Club in New York City in 2003, followed by additional locations in Atlantic City, Las Vegas, and Brooklyn. So naturally, it's primed to be the next celeb hotspot.

Go on, Gwynnie. Time to pop those bottles and celebrate.

To Gwyneth Paltrow, the Best Part About Being Friends with Beyoncé Isn't Beyoncé

Lauren Valenti Associate Web Editor I’m the associate web editor at Marie Claire.
This content is created and maintained by a third party, and imported onto this page to help users provide their email addresses. You may be able to find more information about this and similar content at piano.io
Advertisement - Continue Reading Below
More From Celebrity
Britney Spears Dedicated a Message to Her Sons
Meghan's Face "Lights Up" When Harry Walks In
Advertisement - Continue Reading Below
Kate Middleton, Millennial, Wore Skinny Jeans
'Sex and the City' Star Willie Garson Dies Age 57
Princess Eugenie's Son Got to Meet Prince Philip
Ashley Graham Is Having Twin Boys
Gabrielle Union Danced Topless at a Window
Ben Affleck Is "in Awe" of Jennifer Lopez
Princess Beatrice Has Given Birth to a Baby Girl
Gigi Hadid's Mom Shared Sweet Pics of Khai