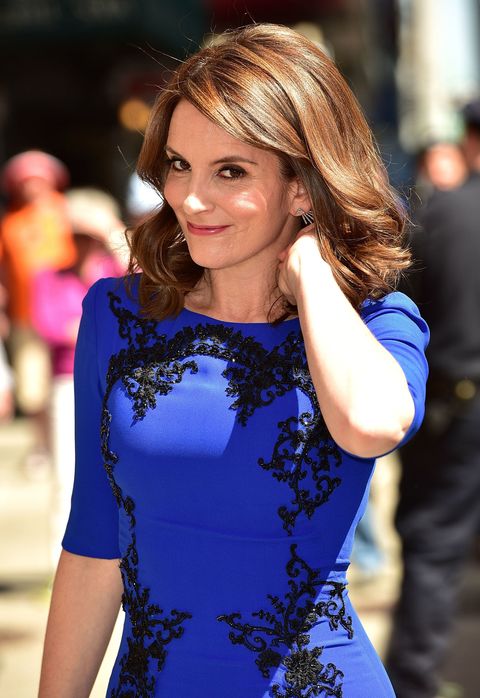 After making more than 20 appearances on Letterman because she lives nearby and celebrities apparently cancel all the time, Tina Fey gave the talk-show legend a farewell present/lesson he won't soon forget.

The hijinks began when the soon-to-retire Late Show host complimented Fey on her embellished dress, to which she replied 1) "Thank you." Then 2) "I don't know if you're aware of the contraptions under here—it's almost medical. And I'm terrible in heels. I dress up like this out of respect for you."

Then, as a way to commemorate her promise that that would be her "last time wearing a fancy dress on at talk show and conforming to gender norms out of respect to you," she took it off, revealing both her shapewear and a leotard printed with "Bye Dave" and #LastDressEver.

There was so much applause.

Hilarious, yes, but also educational and an oh-so-subtle comment on societal expectations of women. You hit it out of the park, Tina Fey, just like you always do.

Amy Schumer Parodies '12 Angry Men' for an Entire Episode, Uses It as a Hilarious Feminist Takedown

Chelsea Peng I'm Chelsea Peng, the assistant editor at MarieClaire.com.
This content is created and maintained by a third party, and imported onto this page to help users provide their email addresses. You may be able to find more information about this and similar content at piano.io
Advertisement - Continue Reading Below
More From Celebrity
Naomi Campbell Is a First-Time Mom
Ariana Grande Got Married Over the Weekend
Advertisement - Continue Reading Below
Ariana Grande Quietly Married Dalton Gomez
Joie de Tracee
Jennifer Lopez and Ben Affleck: Everything We Know
Harry & Oprah's Mental Health Doc Has a Title
Serena Williams Might Miss the Tokyo Olympics
Jennifer and Ben Have "Unreal" Chemistry Together
The Sussexes Marked Archie's Bday in a Lovely Way
Queen's Cousin Accused of Selling Access to Putin