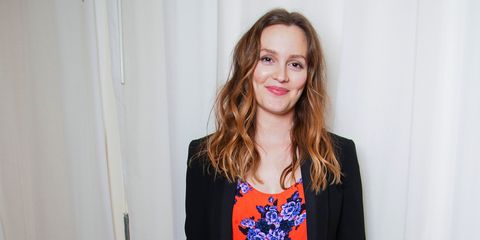 Update, 9/24: The gender and name have been revealed–and it's pretty freakin' cute. According to TMZ, daughter Arlo Day Brody was born in Whittier, California on Sunday, August 4. (Wow, they really kept that quiet, didn't they?)

Update, 9/24: The baby is here! Adam Brody and Leighton Meester have officially become parents, reports Us Weekly. No word yet on the sex or name of the baby. (Which, obviously, means a guessing game for all.) Congrats to the happy couple.

Original story, 5/18: Leighton Meester and Adam Brody, one of the most normal celebrity couples ever (despite being, you know, famous), are going to be parents. PARENTS, YOU GUYS! (Cue the squeals.) E! confirms that the couple are expecting their first child together, after a year of marriage.

The actress had hinted at having little ones soon, telling Nylon, "Most people I know are starting to get married. It'll be kids next. I like the grown-up stuff. I like having a house. I've got dogs."

All we can say is, while we're excited for the duo to become a trio, we're also a little sad that Sandy Cohen is not a real person and the kid won't have him as a grandfather. Because that would be just the best.