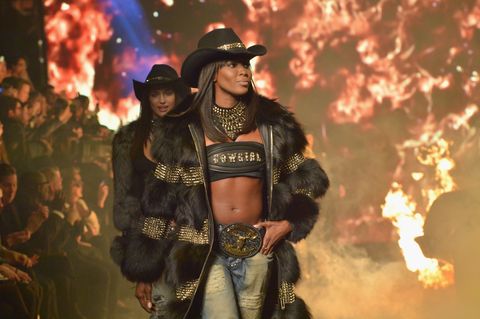 If I were Ryan Murphy and I had just cast Naomi Campbell to play a fashion editor who "pays the ultimate price for her critiques," as TVLine reports, I would 100 percent include the following bit of dialogue.

Naomi, admiring a faux chinchilla cape: "I diiieeeee for this."

The supermodel, who begins shooting next week, will hold her own in scenes opposite Lady Gaga (!!!) and Angela Bassett, which could very likely end in shouting matches and/or bloodshed.

Somehow, I've got a feeling she'll get along just fine, so the real question is: Will she enjoy fake-stabbing Gaga or making out with Hakeem on Empire more?

This content is imported from YouTube. You may be able to find the same content in another format, or you may be able to find more information, at their web site.
Chelsea Peng I'm Chelsea Peng, the assistant editor at MarieClaire.com.
This content is created and maintained by a third party, and imported onto this page to help users provide their email addresses. You may be able to find more information about this and similar content at piano.io
Advertisement - Continue Reading Below
More From Celebrity
Simone Biles Is Honored With Her Own GOAT Emoji
Kate Winslet Reveals Her Favorite Red Carpet Look
Advertisement - Continue Reading Below
Margot Robbie Had a Life-Size Cutout of John Cena
Jennifer Lopez and Ben Affleck Are IG Official
Celebs Share Their Emotional Infertility Stories
14 Candid, Unseen Photos of the Royal Family
Rare Photos From Diana and Charles' Wedding
Ariana's Former Home Has an IMAX in the Building
Cardi B Stunned in a Cherry Red Mugler Dress
Kate Beckinsale Reveals She's Never Been on a Date