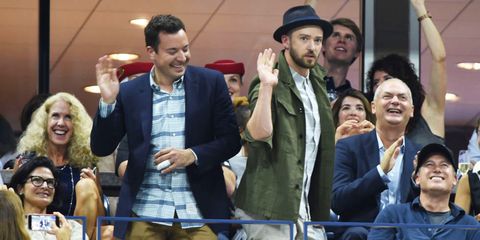 During Wednesday evening's match between Roger Federer and Richard Gasquet, two men caused a disturbance in the stands when they stood and began doing the choreography from Beyoncé's 2008 hit "Single Ladies (Put a Ring on It)."

Here they are at the hand-swivel-y part.

Then they did the "starting my imaginary lawnmower."

The incident was also captured on video.

Here's Jimmy Fallon & Justin Timberlake dancing in the stands to Beyonce on the arena screen pic.twitter.com/c1uGWRkEJZ

Neither Justin Timberlake nor Jimmy Fallon were ejected from the match because they are famous and it was funny, and they went on to appear on television later that night. The end.