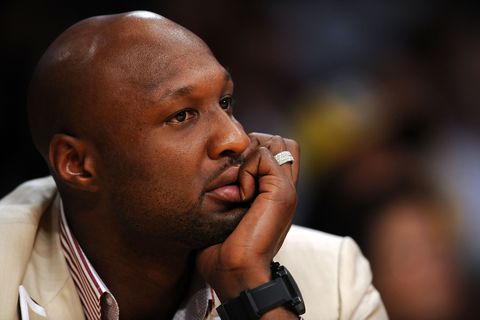 More news is coming to light about what happened to Lamar Odom as he fights for his life in a Nevada hospital room. While hospital sources say that "virtually every drug" was found in his system following his admittance, police have now confirmed that those who called into 911 after finding him unresponsive at a brothel following a night of partying admitted he was using cocaine the night before.

In one of the 911 calls, a caller identified as Richard Hunter, media director for the ranch, told the operator that Lamar was seen doing cocaine on Saturday. "Somebody came up to me and told me he had some cocaine on him," he said. "He did this on Saturday."

Hunter also mentioned that Odom had reportedly taken many of the male enhancement drug "Reload," which says it gives 72-hours of performance enhancing. In 2013, the FDA issued a strong warning against the drug, saying there was an ingredient that would make it interact with many prescription drugs and those with high blood pressure, diabetes, and other conditions. "Consumers should stop using this product immediately and throw it away," it reads.

This content is imported from YouTube. You may be able to find the same content in another format, or you may be able to find more information, at their web site.
Samantha Leal Senior Web Editor I'm Sam, the senior editor at MarieClaire.com.
This content is created and maintained by a third party, and imported onto this page to help users provide their email addresses. You may be able to find more information about this and similar content at piano.io
Advertisement - Continue Reading Below
More From Celebrity
Chloe From 'Too Hot to Handle' Is in 'The Circle'
Comparing the Two Biggest Royal Weddings
Advertisement - Continue Reading Below
Kate, George, and Charlotte Were Seen Shopping
J.Lo Shares First IG Photo Post A-Rod Split
Harry Has Experienced "Frostiness" from Royals
Billie Eilish Just Debuted a Bouncy Blonde Blowout
Gigi Shared an Adorable Spring Selfie With Khai
Katie Holmes Posted a 15th Bday Tribute to Suri
Chrissy Teigen Talked Stigma Around Infertility
Beyoncé Stuns in a Mesh Dress With Matching Gloves