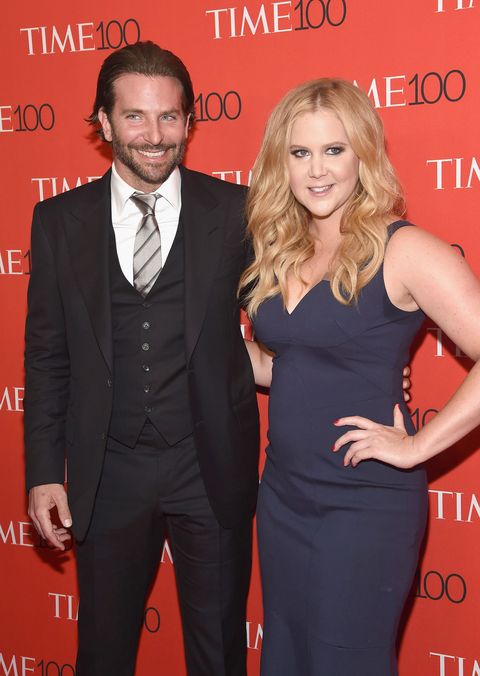 He might have preferred the Benedict Cumberbatch method of making one's engagement known to the public (placing an announcement in the Times—classy AF), but Bradley Cooper is still crazy in (platonic) love with Amy Schumer and would like the world (and Howard Stern) to know their true origin story.

"She wasn't [hitting on me]," he said (via the Daily Beast) of that time the comedienne approached him at the Time 100 event. "But I do remember her coming to sit down because we had an awkward exchange at the MTV Movie Awards where we didn't know each other, and she was sort of yelling my name and then I looked over and was like, 'Hey,' and then we talked. But at first, it was like, 'Who is this person screaming at me?'"

Note to self: Screaming works.
Getty

It became something of a running joke between them, they saw each other again, and the bit about Cooper not letting her leave—the one that made it into her Saturday Night Live monologue—CAME TRUE.

There's no telling who's luckier to have whose friendship, so let's call it a draw, then imagine what it'll be like when they inevitably have a margarita/poker night with mutual buddy JLaw.

Chelsea Peng I'm Chelsea Peng, the assistant editor at MarieClaire.com.
This content is created and maintained by a third party, and imported onto this page to help users provide their email addresses. You may be able to find more information about this and similar content at piano.io
Advertisement - Continue Reading Below
More From Celebrity
Beyoncé Stuns in a Mesh Dress With Matching Gloves
Lizzo and Chris Evans Had the Best IG Interaction
Advertisement - Continue Reading Below
Travis Shared PDA-Heavy Bday Tribute to Kourtney
How the Queen Ends Awkwardly-Long Handshakes
The Queen Has a Rule Against Bad Talking Family
The Queen Took a Pic of Philip With Her to Funeral
The Queen's Tolerance Was the Key to Her Marriage
J.Lo "Likes" Shady IG Post After A-Rod Split 👀
Beyoncé Shares Photos of Her White Power Suit
Will & Kate Welcomed Harry Back Into Their Group