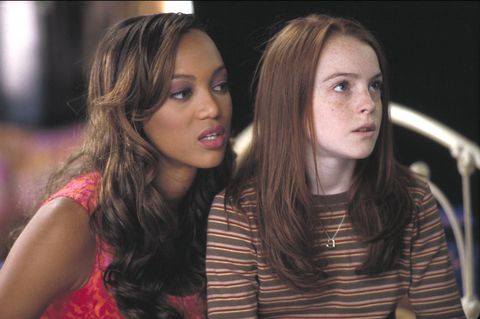 Tyra Banks has already publicly announced she's on board for a Life Size sequel, the 2000 gem of a movie about a girl who—after casting a spell to resurrect her mom, accidentally brings her doll to life—but since then it's been pretty quiet on the Disney nostalgia news front. Until now. Banks is *confirmed* to be reprising her role as Eve (the doll, obviously).

"There is no one else that can play Eve but me, thank you very much!" Banks told Variety. "I'm just joking with you, but yes, I am going to be Eve." There are no other details, especially as far as Lindsay Lohan is concerned. (Aww, LiLo.)

And thankfully, we might not have to wait too long for the movie to come out/we get to bask in nostalgia.

"I think it will be 2016," she said. "We're looking at it as a holiday movie so hopefully holiday 2016. One thing is it's a very precious project to the Disney Channel so they've been doing a lot of re-writes and making sure that this script is really right. I'm really excited about it. I think Life Size is so popular that it can be a feature film because it has such a cult following, so I'm really interested to see what the ratings are going to do for that. I think it's going to be a blockbuster on TV."

You and me both, lady.