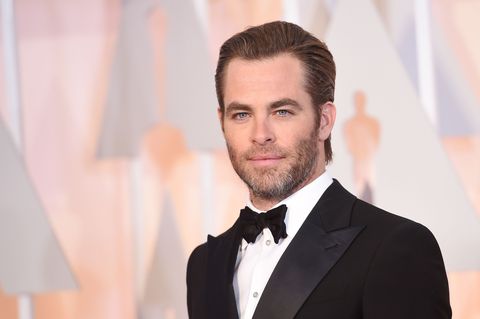 When you think of the Marvel and DC superhero canons, strong female leads don't usually come to mind. Sure, there's the token hot scientist who also knows how to wield a gun, but the main roles for women are typically support systems for their male counterparts. (Take Thor and Dr. Jane Foster, for example.)

These films tend to be boy's clubs filled with heroes whose names literally end in "man," which is why we're so excited about Wonder Woman. The Gal Gadot-fronted action film will hopefully go a long way in redefining some tropes of the genre, in part thanks to Chris Pine taking on the role of damsel in distress.

Chris stars as Wonder Woman's love interest, Steve Trevor, and he's super excited about the role reversal. "It'll be a f—king blast," he told Total Film. "I couldn't be happier to be supporting Gal in what's going to be the first female-driven superhero film."

But wait, Chris has more feminist-approved musings for you: "I think in the world today we've had plenty enough of male-driven everything," he said, melting our hearts in the process. "It's finally time to see how wonderful the world can be with beautiful, strong intelligent women kicking some major ass."

Mehera Bonner Contributor Mehera Bonner is a news writer who focuses on celebrities and royals.
This content is created and maintained by a third party, and imported onto this page to help users provide their email addresses. You may be able to find more information about this and similar content at piano.io
Advertisement - Continue Reading Below
More From Celebrity
Prince Charles Shares Final Exchange With Philip
William and Kate's Children Just Love Airplanes
Advertisement - Continue Reading Below
Jennifer Aniston Answered Bizarre Fan Questions
Prince Charles "Really Wants to Meet" Lilibet
Britney Spears Deleted Her Instagram Account
Megan Fox Won't Be Told "What a Woman Should Be"
Jennifer Garner Shared an Emotional Message on IG
Travis Scott Discussed His Parenting Style
Kanye West Unfollowed Kim Kardashian on Instagram
Kate Hudson Is Engaged to Danny Fujikawa