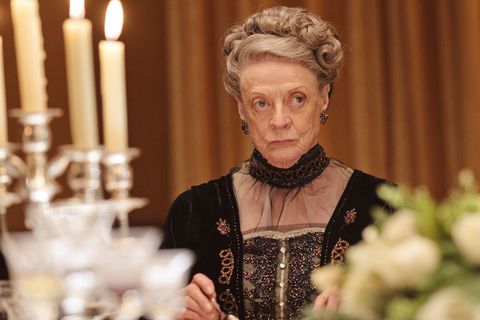 Those of us who've been good and resisted the urge to search out a pirated version of Downton Abbey's final season can now brag that we've got something in common with Maggie Smith: not knowing what happens because we've never seen it! *counts down to January 3*

Following up on an earlier interview with the venerable actress, CBS News asked if she'd watched her own work on the period version of Real Housewives—a description never more accurate than in this video—yet. "No," she said, which is the same answer she gave two years ago. "But they gave me the boxed set. And I'm going to do all sorts of things now, because I'm free!"

Free from having her internal organs squashed by whalebones too. "In actual fact, I have to say that I did cheat a bit," she said of escaping those much-reviled corsets. "Because I promised that if I sat up, bolt upright, I made it look as though I were wearing corsets…But don't tell anybody."

Chelsea Peng I'm Chelsea Peng, the assistant editor at MarieClaire.com.
This content is created and maintained by a third party, and imported onto this page to help users provide their email addresses. You may be able to find more information about this and similar content at piano.io
Advertisement - Continue Reading Below
More From Celebrity
Tracee Ellis Ross Matched Her Mask to Her Sneakers
Jennifer Lawrence Said She Used to Be Republican
Advertisement - Continue Reading Below
See Hailey Bieber's New Justin Tattoo
Meghan and Harry Have Launched Their Website
Meghan and Harry Opened Up About Online Hate
Miley Cyrus Said She Was Chased by a UFO
Why Prince William Was Jealous of Prince Harry
Kate Wore a Stunning Fall Red Coat for Visit
Gigi and Zayn's Body Language, Decoded By A Pro
Billie Eilish Posts Nikes Version of 'The Dress'