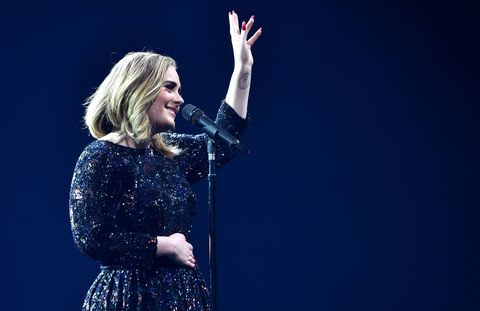 One of the many untold joys of pregnancy is the spontaneous growth of facial hair, a truly miraculous experience that most women tend not to talk about in public. But Adele isn't most women.

The singer told fans in Glasgow that she grew a "beard" after becoming pregnant with her son, Angelo, and named it Larry.

"When I got pregnant I had so much testosterone in me that I grew a beard," she mused in between sob-inducing ballads. "I only cropped it last night. It's actually true. I'm not telling a joke. I actually have a beard, but I'm proud of it. I call it Larry."

Amazing, yes, but there's more. "My man's got a good beard," she continued while the crowd presumably clutched what remained of their pearls. "He trims it sometimes in the summer. I do have a beard myself, so I can understand when it gets hot in the summer."

Um, can we all agree that this is the most incredible series of sentences that have ever been uttered by a human? Okay cool.