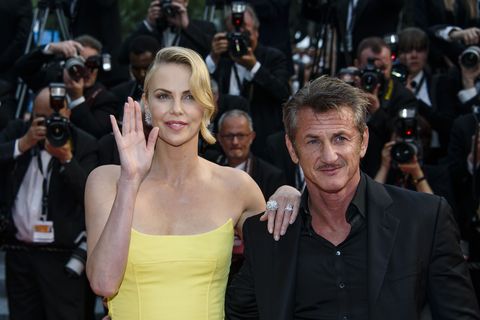 Is it too late now to say sorry? Because the internet totally latched onto the Charlize Theron ghosting thing and declared it a symptom of our culture's further decline (ahem)—except it wasn't true, apparently.

"There is a need to sensationalize things," she said in the April issue of WSJ magazine. "When you leave a relationship there has to be some f*cking crazy story or some crazy drama. And the f*cking ghosting thing, like literally, I still don't even know what it is. It's just its own beast."

"There was an understanding that I was a single mom with a very young boy who I had to put in a situation where he understood that Mommy dates, but that he does not have a father, you know what I mean?" she said. "You have to be very careful and very honest about that stuff. And Sean was great with all of that."

Chelsea Peng I'm Chelsea Peng, the assistant editor at MarieClaire.com.
This content is created and maintained by a third party, and imported onto this page to help users provide their email addresses. You may be able to find more information about this and similar content at piano.io
Advertisement - Continue Reading Below
More From Celebrity
Celebs That You Forgot Were on MTV Shows
The Best TV and Movie Wedding Dresses of All Time
Advertisement - Continue Reading Below
47 'Friends' Facts Every Superfan Should Know
40 Celeb Exes Who Worked Together After a Breakup
35 Unforgettable Royal Wedding Scandals
The 50 Most Popular Episodes of ‘Friends,’ Ranked
Iconic Party Photos From the Past