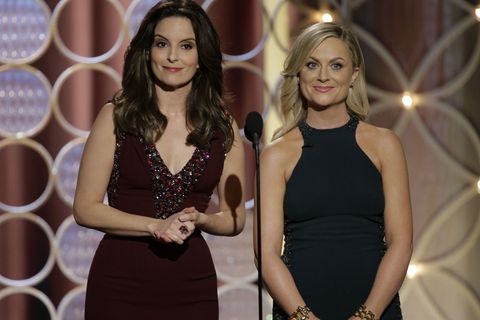 If the Golden Globes/life have taught us anything, it's that Amy Poehler and Tina Fey are a comedy dream team. But, lest we forget that life can also be cruel, we've just learned that they won't be collaborating on a TV series anytime soon.

Why? Because they're both HBICs. So hey, at least the reason is good.

"We're regarded as comedy team, which is totally fine by me," Tina explained during a recent talk at Tribeca Film Festival 2016. "People sometimes used to say, 'Why don't you guys do a series together?' or whatever. And the funny thing is that I think we both know this to be true: It's because we're actually both alphas. So it works in shorts spurts, but I don't know if it would make a real dynasty."

Considering that the entertainment industry is still a boy's club, we're thinking there's plenty of room for Amy and Tina to work independently—as long as they keep hosting the occasional awards show together, of course.