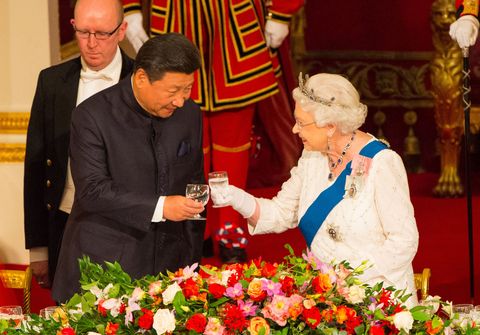 Queen Elizabeth II was wandering around with a bright pink umbrella on Tuesday, when she got uncharacteristically candid about Chinese President Xi Jinping's visit to England in October.

"They were very rude to the ambassador," the Queen told Metropolitan Police commander, Lucy D'Orsi (who said Chinese officials walked out on her).

Lucy's response? "It was very rude and very undiplomatic, I thought."

Weirdly, this exchange was filmed by an "official cameraman" and distributed to journalists, which presumably means the palace wanted to throw some royal shade. As of now, there's no official response from China—but they reportedly censored the conversation on BBC World TV, adopting a clear "new number, who dis?" approach to the situation.

Watch the video below to see the Queen's comments—and also, who wants to bet she sipped actual tea after this?

Mehera Bonner Contributor Mehera Bonner is a news writer who focuses on celebrities and royals.
This content is created and maintained by a third party, and imported onto this page to help users provide their email addresses. You may be able to find more information about this and similar content at piano.io
Advertisement - Continue Reading Below
More From Celebrity
The Queen's Tolerance Was the Key to Her Marriage
J.Lo "Likes" Shady IG Post After A-Rod Split 👀
Advertisement - Continue Reading Below
Beyoncé Shares Photos of Her White Power Suit
Will & Kate Welcomed Harry Back Into Their Group
Queen Left a Handwritten Note on Philip's Coffin
The Queen Said Grief Is the Price We Pay for Love
All of the Photos from Prince Philip's Funeral
The Queen Wore This Brooch to Philip's Funeral
Kate Middleton's Nod to Diana at Philip's Funeral
Queen Elizabeth Appears at Prince Philip's Funeral