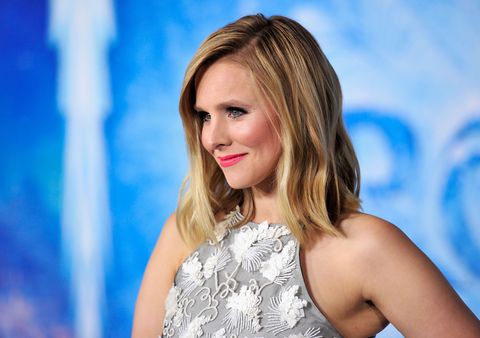 Fact: people suffer from depression, and getting treatment should never be a source of shame. And the more celebrities who use their platform to open up about mental health, the better—which is why we're all 🙌  at Kristen Bell right now.

The 35-year-old actress has a pretty sunny disposition on camera, but—as we all know—a person's exterior isn't always a reflection of their emotional reality. In an essay for Motto, Bell talked about her struggle with depression, and thanked her mother for her openness "on this predominantly silent subject."

"I knew that help was out there—and to seek it without shame," she wrote of suffering from depression at NYU. "When you try to keep things hidden, they fester and ultimately end up revealing themselves in a far more destructive way than if you approach them with honesty."

Bell said she opted not to speak publicly about her mental health for the first 15 years of her career, but (as she notes) depression and anxiety should never ever ever be taboo.

"I felt worthless, like I had nothing to offer, like I was a failure," she wrote. "Now, after seeking help, I can see that those thoughts, of course, couldn't have been more wrong. It's important for me to be candid about this so people in a similar situation can realize that they are not worthless and that they do have something to offer. We all do."

Bell went on to suggest that mental health check-ins be a routine part of wellness, which seems like an idea so basic it's a wonder doctors aren't already on board.

"Mental health check-ins should be as routine as going to the doctor or the dentist," she said. "After all, I'll see the doctor if I have the sniffles. If you tell a friend that you are sick, his first response is likely, 'You should get that checked out by a doctor.' Yet if you tell a friend you're feeling depressed, he will be scared or reluctant to give you that same advice. You know what? I'm over it. It's a knee-jerk reaction to judge people when they're vulnerable. But there's nothing weak about struggling with mental illness."