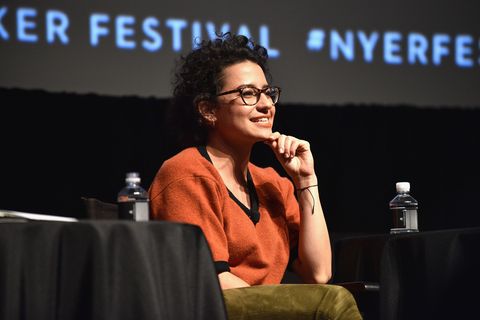 In the event that you're looking for one more reason to love Ilana Glazer, she just called out some random dude who apparently spends his time telling women that he's a writer on Broad City. Because let's be real: there'd be no better pick-up line if this were in fact true. Which it's not.

According to an eye-witness, the comedian outed Broad City's very own catfish during a comedy club appearance on New York's Lower East Side, saying, "No men work on Broad City. Don't f*ck a dude cause you think he works on Broad City."

Words to live by.

Listen to Ilana's full warning below, where she drops this guy's name and fully puts him on blast. (Ahem, might be useful to those of you dating in NYC...):

Mehera Bonner Contributor Mehera Bonner is a news writer who focuses on celebrities and royals—follow her on Instagram.
This content is created and maintained by a third party, and imported onto this page to help users provide their email addresses. You may be able to find more information about this and similar content at piano.io
Advertisement - Continue Reading Below
More From Celebrity
Prince William Statement on Prince Philip's Death
Meghan and Harry Are Facing Security Threats
Advertisement - Continue Reading Below
Selena Gomez Is Drenched in Fake Blood on Set
Amanda Seyfried Talked About Having Panic Attacks
Harry Arrives in the U.K. For Philip's Funeral
Matthew Perry Deletes 'Friends' Reunion Instagram
The Queen's Corgis Are Helping Her With Her Grief
Charles is Looking Forward to Seeing Harry Again
Will & Harry to Walk Together at Philip's Funeral
Beyoncé Wore Tweed Micro Shorts for Date Night