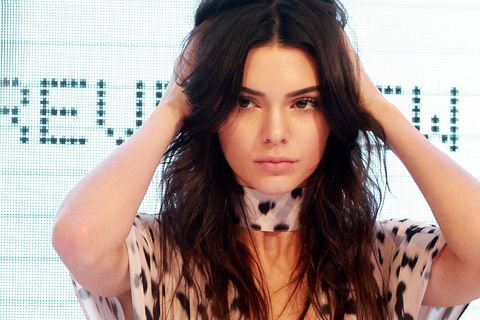 Before there was Kendall Jenner, there was Stephanie Seymour, and apparently she has zero chill when it comes to passing the supermodel torch. In fact, she referred to today's models as "bitches of the moment," so yeah. Shade.

Obviously, Kendall Jenner has no time for this nonsense, and took to her website to pen a lengthy musing about Seymour's comment.

"Gigi sent me the most recent rant and I'm disappointed. If you're going to tell us not to be in ''your moment,' then don't be in mine! This moment is all about being supportive—NOT cyberbullying. But, if you choose to be a cyberbully, I'm going to stick up for myself. No one is trying to steal Stephanie Seymour's thing, or trying to be her. I actually looked up to her. She has a daughter! I guarantee you that she didn't imagine someone so publicly shaming her daughter when she made those comments about us being 'bitches of the moment.'"

Kendall went on to parse through the word "supermodel," and then made a promise to treat future generations of models with respect.

"Being a 'supermodel' is a relative term. If people want to call Gigi and I supermodels now, it doesn't take anything away from supermodels of the past. Obviously, I have so much respect for those women, but right now, we're the models of this time. Significant? Maybe. Hardworking? For sure....When I'm older, I'm going to be so nice to anyone who's trying to do the same thing as me. There are other supermodels who give me tips and build up my confidence, sending me notes after a spread comes out, saying, 'You're killing it.' That's the classy way to behave and I fully intend on being a positive influence on anyone younger than me, my entire life."