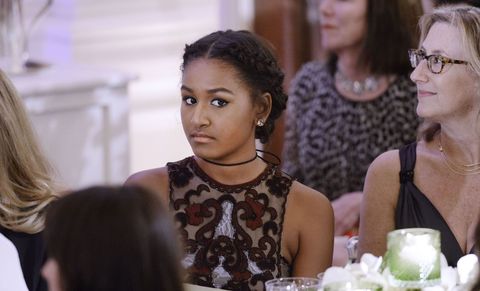 For the past eight years, we've gone through life assuming that Sasha and Malia Obama have no presence on social media. A pretty huge deal considering how many Snapchat addicted teenagers populate this great nation. But hark! It turns out Sasha does use social, a fact that her dad accidentally dropped to—ya know—the entire country.

While commenting on Donald Trump's exceedingly trumpy reign of Twitter terror, Obama said, "Everybody can tweet, but nobody knows what it takes to do the job until you've sat behind the desk. I mean, Sasha tweets, but she doesn't think that she should thereby be sitting behind the desk."

Are we supposed to to assume that Sasha and Malia have been on Twitter this whole time, and were simply shrouded by the social media version of Harry Potter's invisibility cloak? Either way, the internet is doing what it does best:

Plot twist: Sasha Obama is Sasha Fierce and has been Beyonce this whole time.

So Sasha Obama is Gossip Girl?