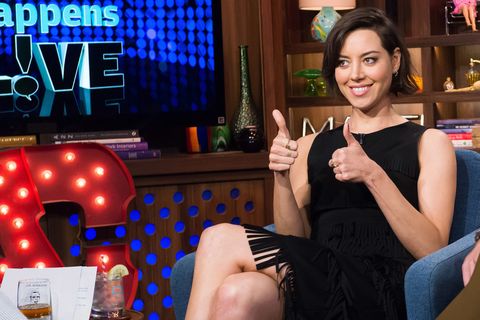 In an interview with The Advocate, Aubrey "Dirty Girl" Plaza came out as bisexual like it was NBD. Because it is NBD.

"I know I have an androgynous thing going on, and there's something masculine about my energy," she said. "Girls are into me—that's no secret. Hey, I'm into them too. I fall in love with girls and guys. I can't help it."

Elsewhere in the conversation, Plaza discussed portraying a lesbian character in Jamie Babbit's Addicted to Fresno, which she said was less about pretending to be a lesbian and more about tapping into her "massive crush on Natasha Lyonne." The same can kind of be said (??) for that one time she went to town on Robert De Niro's nipples during a 10-hour sex-scene shoot.

Chelsea Peng I'm Chelsea Peng, the assistant editor at MarieClaire.com.
This content is created and maintained by a third party, and imported onto this page to help users provide their email addresses. You may be able to find more information about this and similar content at piano.io
Advertisement - Continue Reading Below
More From Celebrity
Travis Covered His Ex' Name With Tattoo for Kourt
Kendall Jenner Wore a Bedazzled Pink Cowboy Hat
Advertisement - Continue Reading Below
Kourtney & Travis Will Def "Have a Baby Together"
Britney Is Done With "Rude, Humiliating" Family
Ben & Jen Are Meeting Up "Whenever Possible"
Anna Kendrick Looked Pretty in Pink at a Premiere
John Mulaney & Olivia Munn Might Split Up: Source
The Sussexes Worried Archie Would Attract Mockery
Diana Would Be "Thrilled" for Harry and Meghan
'Friends' Actor James Michael Tyler Has Died at 59