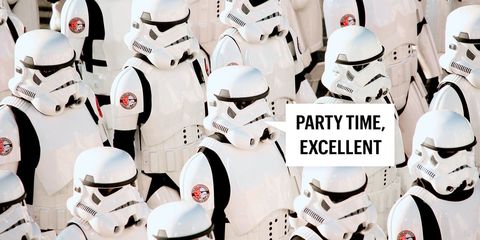 France may have lost, but meanwhile at the Star Wars VIII wrap party... pic.twitter.com/e8TukSYWZc

And Mark Hamill (AKA Luke Skywalker) using the hashtag #SexyStormtroopers, which no one should ever click if they value their eyeballs.

And John Boyega was deeply confused/horrified by Snapchat:

And before you panic, fear not: Oscar Isaac was there in a jaunty fedora:

* Oscar and Pablo at the wrap party for Episode VIII #OscarIsaac #PabloHidalgo Cred: pablohidalgo on Twitter

But clearly, the real VIP was this giant dead dinosaur.