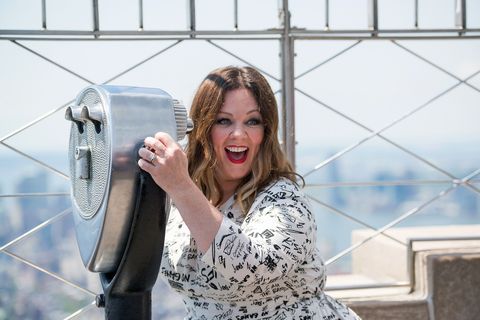 Melissa McCarthy was brought up in an Irish Catholic family, and apparently the topic of sex was off the table. In other words, she never had a conversation with her parents about The Birds And The Bees, which means she developed a pretty...uh...unique notion about what's actually involved in intercourse.

"I did not know parts moved, so I assumed both parties had to do the Chinese splits," the Ghostbusters actress recently told Conan O'Brien. "I literally thought you had to go like that [edit note: at this point, McCarthy is miming splits] with your legs out, and then you lay down and, like, scooted in..."

Understandably, McCarthy was teased mercilessly for telling friends that her parents never had sex due to her dad being split-challenged. Direct quote: "They don't do that, nor have they ever, or are they going to do it...I know they've never done it because I know for a fact my dad can't do the Chinese splits."

Watch the video below to see McCarthy blush harder than she's ever blushed before.