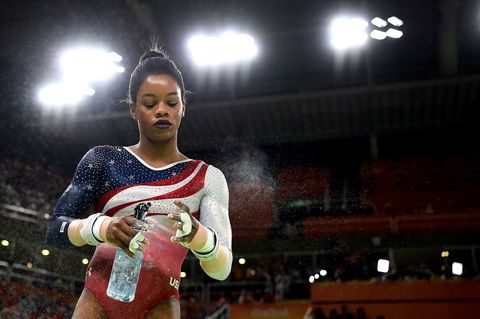 Gabby Douglas went to the Olympics and totally killed it as part of the U.S. Women's Gymnastics Team. But naturally, Twitter took time out of it's busy "defend Ryan Lochte at all costs" schedule to criticize Douglas' hair, facial expression, and patriotism. You know, just the usual racism and sexism she puts up with every day. That said, Douglas' attitude is pretty positive: she came to Rio to win/have fun, and she did exactly that.

"I had fun," the gymnast said of her experience. "Maybe people weren't being fair on social media, but that's social media for you. I just found things to be positive about. And there's a lot to be happy about. We won the gold medal as a team, and it was just such an amazing experience. I came to the Olympics and won a gold medal! That's still really awesome. I can only do what I can do, and if people want to say their stuff on social media, I can't stop them."

As rough as Twitter can be, there's plenty of positivity to be found if you know what hashtags to click on, and Douglas was especially inspired by #LOVE4GABBYUSA. "That was just awesome," she said. "It felt really good to have people support me. It was a good reminder that where there is hate, love is more."