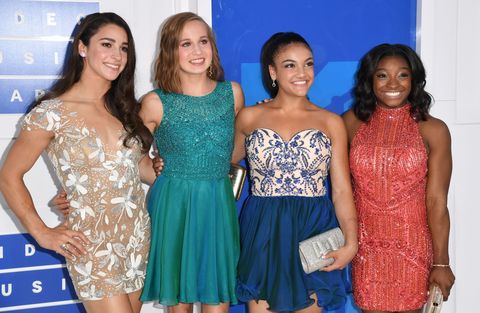 Kim and Kanye basically had the audience cam to themselves, Rihanna curved Drake on national television, and Michael Phelps went "OH MY GOD," but perhaps no guests had more fun at Sunday night's MTV Video Music Awards than the Final Five—sadly, minus one, though it was for an extremely good reason.

When Madison Kocian, Aly Raisman, Laurie Hernandez, and Simone Biles—in the embellished Sherri Hill prom dress she never got to wear before—hit the stage, the world asked "But where's Gabby?!" The answer is in the Instagram the gymnast posted pre-show, though she doesn't give a reason for the hospitalization.

Awww. But at least the Final Five was whole for part of the night, with some VIPs standing in for Douglas.