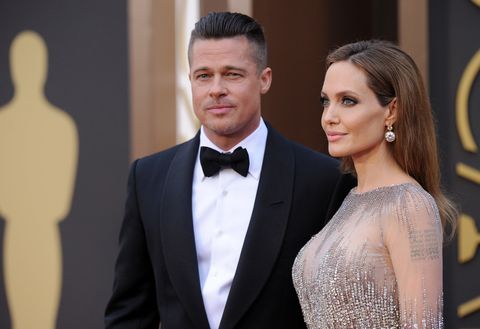 Update 9/22, 1:40 p.m.: TMZ is now claiming that the case against Brad Pitt has been referred to the FBI, as LAPD "did not have jurisdiction because the alleged incident occurred in the air, on a flight from France to the U.S." And the saga continues...

Update 9/22, 11 a.m.: Despite earlier reports, the LAPD has issued a statement saying they are "not handling any report or allegations into child abuse for Mr. Brad Pitt." Officer Jenny Houser adds, "The child abuse unit with LAPD has no open investigation on Brad Pitt or Angelina Jolie."

Amara Suarez, a spokeswoman for the Los Angeles County Department of Children and Family Services, issued a statement that the organization "can't confirm or deny the subjects of our investigations due to confidentiality laws."

Following news that Angelina Jolie filed for divorce from Brad Pitt, TMZ reports that the actor is being investigated by the LAPD and L.A. County Dept. of Children and Family Services for child abuse.

Pitt was allegedly verbally and physically abusive with his children while on a flight last Wednesday, when he was drunk on a private jet: "He allegedly went wild, screaming and getting physical with the kids."

The plane reportedly landed at 8 p.m. and Pitt continued to show signs of anger on the tarmac. At this point, someone reported him to the department of Children and Family Services, who are said to have already interviewed the couple, and plan to interview the kids.

TMZ cites the investigation as "ongoing," and a source close to Pitt tells them, "He takes the matter very seriously and says he did not commit any abuse of his children. It's unfortunate that people involved are continuing to present him in the worst possible light."

The incident was allegedly the catalyst for Jolie's divorce filing, which took place a few days later. You can read her statement here, and Pitt's statement here.

Mehera Bonner Contributor Mehera Bonner is a news writer who focuses on celebrities and royals.
This content is created and maintained by a third party, and imported onto this page to help users provide their email addresses. You may be able to find more information about this and similar content at piano.io
Advertisement - Continue Reading Below
More From Celebrity
Irina Shayk Shared a Rare Photo of Her Daughter
John Travolta Talked Dancing With Princess Diana
Advertisement - Continue Reading Below
Meghan Markle and Archie Speak to the Queen
Who Is Alexandria Ocasio-Cortez's Partner?
Did Charles, Harry, and William Mend Relationship?
The Kardashians' Most Body-Confident Nude Shoots
Chrissy Teigen + Meghan Markle Spoke About Loss
Prince Harry Is Back in Cali With Meghan
Lizzo Just Shared an Unedited Naked Selfie
Queen Elizabeth's Stationery Breaks Tradition