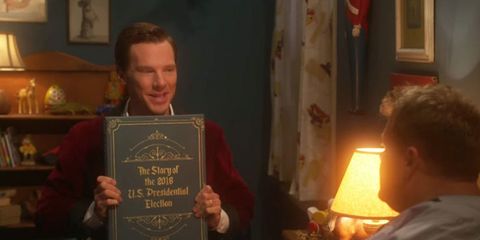 If you think the story of the 2016 Presidential Election has been a scary one, know that it, like everything else, sounds at least a little bit better when Benedict Cumberbatch tells it.

Cumberbatch stopped by The Late Late Show last night to tell America the nightmare-ish story of the election in his soothing British accent. In the sketch, host James Corden plays Cumberbatch's son, who requests a bedtime story. Daddy Cumberbatch goes with easily the scariest story on the shelf: The Story of the 2016 U.S. Presidential Election.

The story follows "the lady in the beige pantsuit," and her journey through a dark forest of emails and quest to battle a giant orange monster and make her way to the big white house and rule the land.

At the end of the story, James asks Daddy Cumberbatch, "Did the lady make it to the White House?"

"We can't tell that yet, son and neither can the polls. Let's just hope that when you wake up in the morning, every man and woman in America has turned out to vote," Cumberbatch says before addressing the camera/America/everyone who thinks their vote "doesn't count." "Because no matter what your political affiliations are, you have a civic duty to vote. And as long as you do, no one can tell you that this election was rigged."