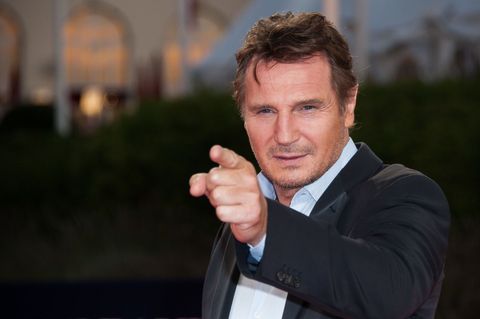 In an alternate universe in which Liam Neeson would have to leave the safety of the Taken franchise to audition for a mall Santa gig, he would, as expected, lend the role a certain kind of...intensity, as this video from the Late Show with Stephen Colbert imagines. Just go with it.

"If you don't mind me saying, it's right," he argues after his first attempts are deemed too intimidating. "Do you understand what Santa's saying? He's making a list: naughty, nice. He's detailed. Single-minded. He's an eye in the sky bringing swift judgment."

😂 but true. Watch the video here.

Chelsea Peng I'm Chelsea Peng, the assistant editor at MarieClaire.com.
This content is created and maintained by a third party, and imported onto this page to help users provide their email addresses. You may be able to find more information about this and similar content at piano.io
Advertisement - Continue Reading Below
More From Celebrity
Kate's Kids Want Her to Stop Taking Their Pictures
SJP Posted Pics from the 'SATC' Revival Table Read
Advertisement - Continue Reading Below
Kate Wore a Pearl Bracelet That Used to Be Diana's
Harry's HRH Title Was Removed from a Diana Display
Harry and Meghan Are Trying to Keep the Peace
Olympia Wore a Mini Version of Serena's Unitard
Meghan's Mom Doria Ragland Is Helping the Sussexes
Gigi and Baby Khai Twin in Matching Swimsuits
Diana Rewore this Dress for the Sweetest Reason
Sussexes Did Consult Queen on Using Name Lilibet