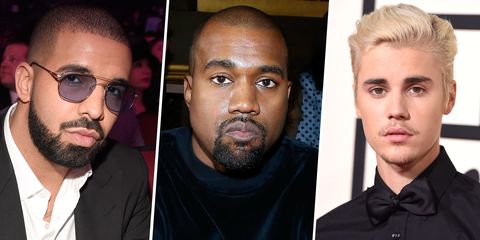 The Grammy Awards air on February 12, and promise to be a celebrity-packed event with performances from the likes of John Legend and Bruno Mars. But some major names are opting out of music's biggest night.

Justin Bieber, Kanye West, and Drake are all skipping the show—despite being nominated for awards. TMZ reports that Bieber "doesn't think the Grammys are relevant or representative, especially when it comes to young singers," while Drake will reportedly be on tour. Meanwhile, Kanye has been vocal about boycotting the Grammy Awards if Frank Ocean's Blonde isn't nominated. It should be noted that album hasn't been nominated, but possibly because it wasn't put up for consideration by Ocean or his team.

"I'll tell you this right now: if his album is not nominated in no categories, I'm not showing up to the Grammys," Kanye said in October. "As artists, we've got to come together to fight the bullshit."

For a list of artists performing at the Grammy Awards, head over here. We'll miss you, Kanye.