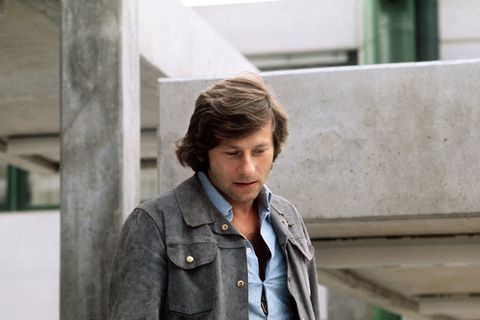 In 1977, French director Roman Polanski was arrested for raping a 13-year-old girl. He pled guilty to unlawful intercourse with a minor and took a plea bargain—but ended up fleeing the country after learning he could face a harsh sentence.

Now, Polanski is requesting that a 2010 transcript of prosecutor Deputy District Attorney Roger Gunson be unsealed, which is said to contain a judicial promise that would have allowed the director to spend 90 days in a psychiatric evaluation—presumably instead of jail. Deadline describes Polanski's request to unseal the transcript as a clear attempt to return to the U.S. and avoid jail time, which has lead to an opposition filing and a call to bring Polanski back into the country to sit trial.

Roman Polanksi at the Santa Monica Courthouse in 1977.
Getty Images

"It is the People's position that resolution of this case requires the presence of the defendant. He can return to this court and argue for a favorable sentence. He can return to court and make a motion to withdraw his plea and face the possibility of a trial on all of the original charges. He can file an appeal of any order of the court to the Courts of Appeal. He can negotiate with the People. What he cannot do is dictate outcomes from afar while insulating himself from any potential adverse consequence."

Roman Polanski at a press conference on October 30, 2015, after The District Court in Krakow rejected a US request extradition.
Getty Images

Polanski has been living in Europe since fleeing America, and there have been several attempts to extradite him. He's continued making movies during this time, including The Pianist. The request to unseal the 2010 transcript will be argued in the presence of LASC Judge Scott Gordon on March 20, so stay tuned.

Mehera Bonner Contributor Mehera Bonner is a news writer who focuses on celebrities and royals.
This content is created and maintained by a third party, and imported onto this page to help users provide their email addresses. You may be able to find more information about this and similar content at piano.io
Advertisement - Continue Reading Below
More From Celebrity
Travis Covered His Ex' Name With Tattoo for Kourt
Kendall Jenner Wore a Bedazzled Pink Cowboy Hat
Advertisement - Continue Reading Below
Kourtney & Travis Will Def "Have a Baby Together"
Britney Is Done With "Rude, Humiliating" Family
Ben & Jen Are Meeting Up "Whenever Possible"
Anna Kendrick Looked Pretty in Pink at a Premiere
John Mulaney & Olivia Munn Might Split Up: Source
The Sussexes Worried Archie Would Attract Mockery
Diana Would Be "Thrilled" for Harry and Meghan
'Friends' Actor James Michael Tyler Has Died at 59