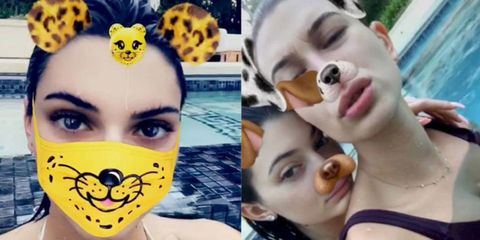 Last week, Kendall Jenner was reportedly robbed of $200,000 worth of jewelry. Initial reports suggested that Kendall had left the house for most of the day and returned in the evening, only to discover that she was missing jewelry hours later. However, later accounts suggested that she had hosted a party Wednesday night and that a guest may have stolen the jewelry when Kendall stepped out briefly.

Whatever went down, Kendall tried her best to put it behind her this weekend and, on Saturday, she invited her sister, Kylie Jenner, and her good friend Hailey Baldwin over for a pool party, People reports.

Oh and Kylie documented the day of fun on Snapchat, as King Kylie does.

Kylie and Hailey went for the classic dog filter selfie:

And Kendall opted for the cheetah surgical mask filter, because that's a thing now:

Nothing like a pool/Snapchat party to take the edge off.

Kayleigh Roberts Kayleigh Roberts is the weekend editor at Marie Claire, covering celebrity and entertainment news, from actual royals like Kate Middleton and Meghan Markle to Hollywood royalty, like Katie Holmes and Chrissy Teigen.
This content is created and maintained by a third party, and imported onto this page to help users provide their email addresses. You may be able to find more information about this and similar content at piano.io
Advertisement - Continue Reading Below
More From Celebrity
The Queen Was by Prince Philip's Side When He Died
Prince Harry Is "Really Upset" Over Philip's Death
Advertisement - Continue Reading Below
Will Harry & Meg Attend Prince Philip's Funeral?
The Queen Is Hopeful Prince Harry Will Return Home
Prince Charles Visits the Queen at Windsor Castle
Harry & Meghan React to Prince Philip's Death
Prince Philip Will Not Have a State Funeral
What 'The Crown' Got Wrong about Prince Philip
Touching Things Queen Has Said About Prince Philip
Your Guide to the Current Royal Line of Succession