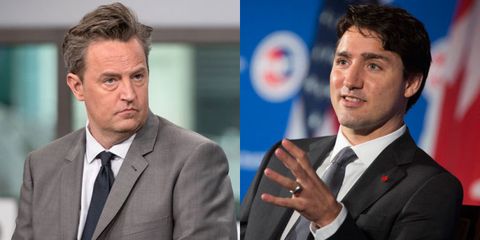 Last month, Matthew Perry confessed to a bit of childhood bullying during an interview with Jimmy Kimmel. And the target of his elementary school aggression was none other than current Canadian Prime Minister Justin Trudeau.

In addition to being members of the Most Successful Fifth Grade Class of All Time, Perry and Trudeau were also apparently into the same sports. Trudeau was better at said sports and thus Little Perry's rage.

"My friend Chris Murray, who was also in the fifth grade in Canada, reminded me that we actually beat up Justin Trudeau," Perry explained. "We both beat him up. I think he was excelling in a sport that we weren't so it was pure jealousy."

Yesterday, Trudeau finally responded to the viral tale, jokingly tweeting that he'd actually like a rematch because "who hasn't wanted to punch Chandler?"

I've been giving it some thought, and you know what, who hasn't wanted to punch Chandler? How about a rematch @MatthewPerry?