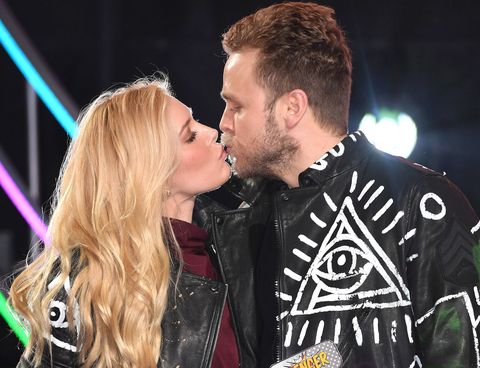 In a 2015 interview, Heidi Montag said she and husband Spencer Pratt were too busy trying to land their own TV show to worry about having children. They also threatened to name their first kid Spider. The first bit just became untrue, while the second bit...remains to be seen, as the couple have announced via Us Weekly that they are expecting a baby.

"The look on her face, I can't even describe it," Pratt said of his wife standing over him one morning. "She was literally glowing. I thought she was about to say she made muffins or banana bread."

No, but she had made another type of bun, to which Pratt replied, "I was like, 'Whoa, that's way more exciting than banana bread!'"

Congratulations to Speidi—may you never run out of fish sticks or Sour Patch Kids (she's craving both), and may the crystals change your mind about the name thing.

Chelsea Peng I'm Chelsea Peng, the assistant editor at MarieClaire.com.
This content is created and maintained by a third party, and imported onto this page to help users provide their email addresses. You may be able to find more information about this and similar content at piano.io
Advertisement - Continue Reading Below
More From Celebrity
Lilibet May Be Christened in California After All
The Sweet Family Photos in Prince William's Office
Advertisement - Continue Reading Below
Royal Family Members Can’t Eat Pasta or Potatoes
Prince George Is an Environmentalist, Too
Salma Hayek Looked Super Hot in Leopard Print
Britney Spears Just Trolled Justin Timberlake
Billie Eilish Says Kate and Will Were "So Normal"
Prince William Slammed Billionaires' "Space Race"
Lady Gaga Draped Herself in $100 Bills
Kate Middleton Wore Green to Celebrate Nature