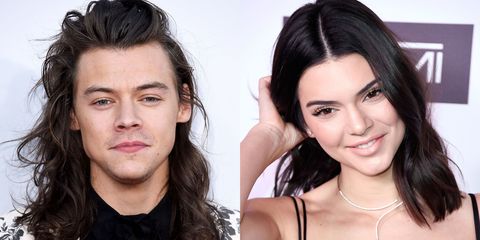 Harry Styles just gave an *very* honest interview with Rolling Stone, and aside from opening up about his relationship with Taylor Swift, he implied that his new album is about none other than Kendall Jenner.

"He notes a more recent relationship, possibly over now, but significant for the past few years. (Styles has often been spotted with Kendall Jenner, but he won't confirm that's who he's talking about.) 'She's a huge part of the album,' says Styles. 'Sometimes you want to tip the hat, and sometimes you just want to give them the whole cap ...  and hope they know it's just for them.'"

As Rolling Stone notes, Styles and Jenner have been dating on-again/off-again since 2015, when they were photographed on a yacht together. Their relationship was confirmed by Khloe Kardashian, who said "Why are they a good match? Well, they're both super hot, super great, sweet people. And if I'm on a yacht in St. Barts if I'm—how old is she, 20? He's 20?—hey, I ain't mad at you, Kenny. Do your thing, girl."

The pair were last rumored to be giving their relationship a shot in 2016. In other news, BRB, listening to "Sign of the Times" in an attempt to find hidden Kendall references.