You may use it for rick-rolling and learning how to blend your makeup with a 7-minute egg, but did you know YouTube could make you substantially more Kate Middleton-like? Really!

In an interview with the Daily Mail, actress Charlotte Rilley, who plays the Duchess of Cambridge in the new BBC2 seriesKing Charles III, said she prepared for the role by "binge-watching" video clips, presumably to get her character's mannerisms and accent exactly right. (Bit tough, considering there are so few of her speaking for very long.) 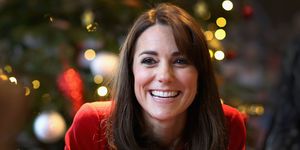 But at least she looks the part, however controversial her portrayal of the Duchess—as the "CEO of a business" who wants Charles to abdicate in favor of William—might be.