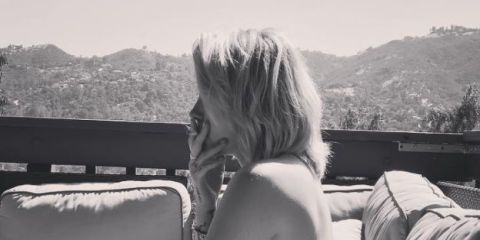 Paris Jackson's latest Instagram post is all about positivity. Along with the black and white photo of herself posing topless, Jackson discussed what nudity means to her. As well as making a feminist statement, the model wrote at length about why being naked is so important to her wellbeing.

Jackson wrote on Instagram, "being naked is part of what makes us human. for me it helps me feel more connected to mama gaia." As well as being a spiritual experience for her, Jackson said that nudity doesn't always have to be titillating. She said, "you don't have to make it sexual the way many hollywood stars (and the media) do." It's refreshing to hear a celebrity discuss body image in such a positive, and logical, way.

She continued, "not only is your body a temple and should be worshipped as so, but also part of feminism is being able to express yourself in your own way, whether it's being conservative and wearing lots of clothes or showing yourself." Jackson's approach to self-love is about encouraging people to embrace their own truths, and celebrate their bodies in a way that works for them, which is really inspiring.