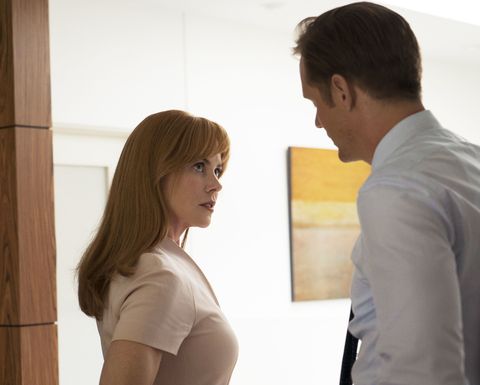 Anyone who watched HBO's Big Little Lies knows how disturbing, graphic, and violent the sex scenes were between Nicole Kidman and Alexander Skarsgard—and apparently they had a deep impact on the actress. In a recent interview with W Magazine, Kidman explained that the sex scenes/fight scenes—which were often unrehearsed–"felt dangerous and really upsetting," and that she'd go home afterwards "ashamed."

Related Story
These Are the Best New Shows on TV

"When I would go home, I would feel ashamed, and that's the same emotions and the same feelings that Celeste was having, so we were very much parallel in the feelings," she said, later adding, "I felt very exposed and vulnerable, and deeply humiliated at times. I mean, I remember lying on the floor in the bathroom at the very end when we were doing the scenes in episode seven, and I was lying on the floor and I just wouldn't get up in-between takes."

In a previous interview with Vogue, Kidman said her husband Keith Urban was disturbed by the bruises she incurred while filming: "I had to take things like Advil because I was being thrown around physically. I was really bruised. At one point Keith was like 'I'm going to take a photo of your back because it's covered in deep, massive bruises.' He was devastated seeing it, but then he would say, 'But I have an artist wife!'"

Mehera Bonner Contributor Mehera Bonner is a news writer who focuses on celebrities and royals.
This content is created and maintained by a third party, and imported onto this page to help users provide their email addresses. You may be able to find more information about this and similar content at piano.io
Advertisement - Continue Reading Below
More From Celebrity
Simone's Boyfriend Sent Her the Sweetest Message
What Happens on Katie's Season?
Advertisement - Continue Reading Below
Rebel Wilson Recreated This Britney Spears Look
Jennifer Lopez Flew Back From European Getaway
Jennifer Lopez Wears Old Bracelet From Ben Affleck
Simone Biles Cheers on MyKayla Skinner
See the Royals Socialize at a 1991 Cocktail Party
Eugenie Posts Pics from Harry & Meghan's Home
Queen Trolled Tourists Who Didn't Recognize Her
Blake and Ryan Recreated Their First Date on IG