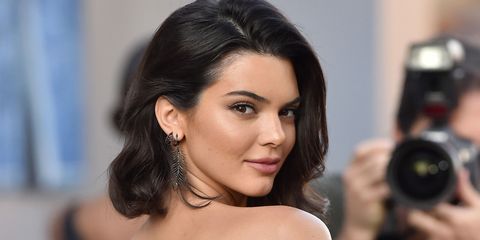 According to an Instagram post by Brooklyn bar Baby's All Right, Kendall Jenner recently failed to tip her bartender on a $24 bill. The bar posted an alleged copy of Jenner's receipt, which is signed by the reality star, but no amount has been entered into the tip section.

The Instagram post's simple caption of "Don't forget to tip your bartender :)" has caused quite a stir. While the authenticity of the receipt is still under debate, social media users have been quick to judge Jenner, and are already taking sides. Following the controversy surrounding her distasteful Pepsi advert, Jenner has consistently found herself under even more scrutiny than usual.

Many have called Jenner "cheap" for not tipping, jumping to the defence of the bartender, with one Instagram user writing, "100% FACT. I was a bartender and we lived off of tips. Come on now." However, others have taken Jenner's side, with one user writing, "whoever posted this should get fired it's unprofessional."

As Jenner's reported income in 2016, according to Forbes, was $17 million, the majority of commenters seem to think that the model and TV star should have tipped her server in Baby's All Right. We'll all just have to wait patiently and see if Jenner responds to the allegations.

Amy Mackelden Amy Mackelden is a freelance writer, editor, and disability activist.
This content is created and maintained by a third party, and imported onto this page to help users provide their email addresses. You may be able to find more information about this and similar content at piano.io
Advertisement - Continue Reading Below
More From Celebrity
Will & Kate Are Nervous About George's Future
George Won't Be Forced to Go to Boarding School
Advertisement - Continue Reading Below
Diana Would Have Written a Memoir Too, Friend Says
A Slice of Diana's Actual Wedding Cake Is For Sale
Matt Damon Trolled Ben Affleck and Jennifer Lopez
This Old Video of the Queen Saying "Nah" Is LOL
Diana Had a Secret Message on Her Wedding Shoes
Will's Friends Made "Jibes" About Kate's Mom
William Will Suffer "Worst" from Harry's Memoir
Simone's Boyfriend Sent Her the Sweetest Message