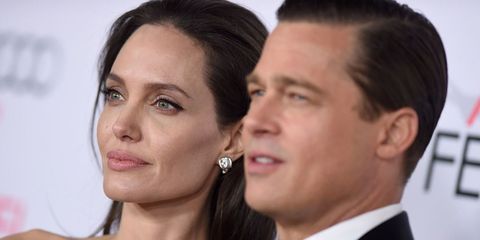 Angelina Jolie doesn't come across as a woman who lets anything trouble her, but in an interview with the Telegraph she admits she hasn't entirely enjoyed the promotional rounds for her most recent film. "This is the first time I have done this for a long time. It's not easy," she says, "I am a little shy this time, because I am not as strong inside as I have been in the past."

According to The Daily Mail, there is talk of Brad Pitt and Angelina Jolie "consciously re-coupling," and as she reveals to the Telegraph, it's clear that Jolie hasn't fully adjusted to her new life. But whether the couple will rekindle their relationship is still very much unknown.

Jolie has co-written, produced and directed her latest project, the Cambodian-set drama, First They Killed My Father, based on the Loung Ung's 2000 memoir of the Khmer Rouge genocide. The book tells the story of Ung's parents and two of her siblings who died along with an estimated two million Cambodians during the conflict in the 1970s. At the same time as working on the film, Jolie has been dealing with the breakdown of her marriage to Brad Pitt.

"It's been difficult," she says. "I don't enjoy being single. It's not something I wanted. There's nothing nice about it. It's just hard. Sometimes maybe it appears I am pulling it all together, but really I am just trying to get through my days. Emotionally it's been a very difficult year and I have had some other health issues. So my health is something I have to monitor."

Jolie has had the support of her children, who remained with her while she was making the film. Her son Maddox, a Cambodian orphan who Jolie adopted when he was three months old, has helped with its production.

"I really wanted Maddox to learn about Cambodian history, so I felt that this movie was a journey that we could take," she says. "And he went really deeply into the research and into the edit. And having somebody younger there to say, 'you are losing my attention,' or 'that is too complicated,' was really helpful."

Following the promotion of First They Killed My Father, Jolie intends to enjoy some downtime, settling her family into their new Los Angeles mansion, a property once owned by Hollywood icon Cecil B. DeMille, which she recently bought for $24.5m.

"I think now I need to rediscover a little bit of the old me," she says. "I think we lose our way a bit. I have had a lot happen in my life, from certain people passing to health issues to raising the children.

"And it's been a very good time to absorb and develop and grow. But maybe now that my kids are growing up I am starting to realise that my own sense of play has been put on hold for a while. And maybe them hitting their teens is going to bring out a little more fun in mom." She laughs. "So maybe I am going back. It may be time."