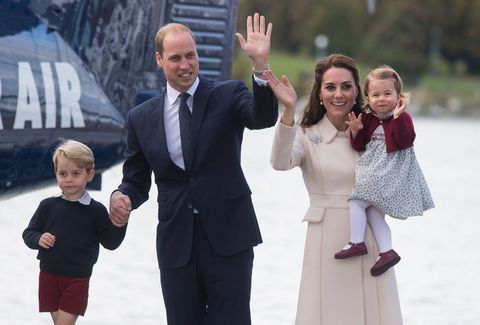 THE BEST news this morning! The Duke and Duchess of Cambridge are expecting their third child. To put that another way: ANOTHER ROYAL BABY IS COMING!

"Their Royal Highnesses The Duke and Duchess of Cambridge are very pleased to announce that The Duchess of Cambridge is expecting their third child," reads a statement from Kensington Palace, released this morning. "The Queen and members of both families are delighted with the news."

As with her first two pregnancies, Kate is suffering from acute morning sickness, known as Hyperemesis Gravidarum, which forced her to cancel an engagement today in London. According to People, Kate is likely less than three months pregnant (which would make her due around February or March) and the announcement was made because she was forced to cancel an engagement.

This third baby will join Princess Charlotte, 2, and Prince George, 4, and their royal chubby cheeks.

CONGRATULATIONS WILL AND KATE!

Now, excuse us while we sit here and look at a zillion pics of Prince George's adorable face and contemplate our happy futures.

Sally Holmes Digital Director Sally is the Digital Director of MarieClaire.com where she oversees coverage of all the things the Marie Claire reader wants to know about, including politics, beauty, fashion, celebs, and Prince Harry's facial hair.
Advertisement - Continue Reading Below
More From Celebrity
36 Celebrity Couples Who Love Some PDA
Ben Affleck Is Blond Now
Advertisement - Continue Reading Below
A Timeline of Charles and Diana's Relationship
Kendall Jenner Wants to Work for Beyoncé
Harry & Jon Bon Jovi Sing Together at Royal Event
Khloé Kardashian Is Being Trolled Over Febreze
A 'Friends' Reunion Special Is Coming to HBO Max
Katie Holmes Is in Head-to-Toe Chloé at Their Show
Ariel Winter Now Has Strawberry Blonde Hair
46 Stars Who Dated Before They Were Famous