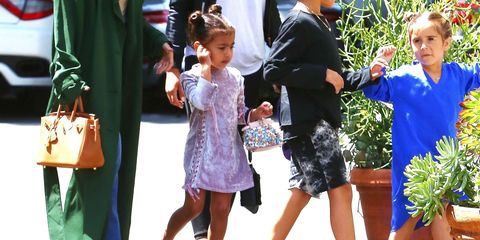 We never thought we'd be looking to a toddler for fashion advice, but here we are. Yes, when it comes to North West we've got to give her props. And with parents (hiii Kimye!) that have a certain reputation for perfection, it only makes sense that North follow suit. Here are all the times this little tot looked so fashionable it made you wish Kim would adopt you.

With her aunt Kourtney and cousins in tow, she steps out in a pink velvet lace-up dress, a bejeweled bag, and sneakers with her parents names' airbrushed onto the backs.

Nori wears so many trends in one little outfit. Let's break it down: black furry slides by AKID, a velvet slip dress with a white tank underneath, and a sporty baseball cap. A+ all around.

Little Northie stepped out in a red velvet slip dress layered over a graphic tee paired with a skinny black choker, baby Yeezy boosts and double-bun hairstyle. Her quickly developing aesthetic is sure to outdo us all, considering she hand-picks the fabrics for her custom clothes...

North West is already the master of the outfit repeat. She stepped out with mother Kim K in NYC wearing a cream, velvet dress seen earlier in the week. This time, the tot wore a $1000 mini Louis Vuitton bag on her arm and a pair of white Yeezy boosts. Seriously, we need her closet like yesterday.

Who wants a cat purse now? Giving her Fallon chokers a break, North goes for a string of pearls and denim cutoffs.

While exploring Cuba with her parents, Nori wore a cream-hued sundress with crochet detail and espadrille flats.

The fashionable toddler had the Miami Beach look on lock this weekend with this adorable tiger swimsuit.

While skiing with her mama, Nori kept toasty in a fur-trimmed puffer coat, snow pants, and a pom-pom beanie.

While hitting LACMA (you know, as toddlers do), North West matched her mama in a fierce, flame-decorated leather jacket, denim cut-offs, and choker, as well as mixed-print tennis shoes.

On an Easter egg hunt at Underwood Farms in L.A., North West met the bunny of the hour with her cousin Penelope. For the occasion, she donned a gold chain choker, white logo sweater, and bunny ears.

Over the weekend while celebrating her Uncle Rob's birthday, North West was a teeny-tiny punk rocker in a choker, black spaghetti strap dress, tights, and Doc Martens boots.

You know when you can't take off your jacket because it's an integral part of your *look?* That is little Nori here, who wore her $3,500 crystal fox fur coat in L.A. on Tuesday, with a pink sweatshirt and hat, jeans, Converse, and a red lollipop.

En route to ballet class, Nori sported a pink fur jacket, custom Fallon rose gold choker, and matching pink tights i.e. so not what you wore to pirouette as a kid.

Going rogue for an outing with her cousin P, North rocks a studded choker, black long-sleeve shirt, rolled-up jeans, and high-tops like a boss.

Our first peek into North West's closet (check out those denim options), looks like she's all about her Minnie Mouse dress and letting her curls run wild.

Joining the ranks of Queen Bey and Rihanna, West is proving that metallic body tattoos are still very much a thing—and in mirrored Ray-Ban aviators to boot. One word: Badass.

While on vacation in St. Barts, Norry opted to dress the part of meeting a mermaid—bikini, sparkly green fish tail, et al.

During a play date with P, she looks like she came straight from dance class in a white leotard and matching tights.

While hanging out with cousin P, North wears a fringed gray tank top and denim shorts.

Norry has gone nautical for summer and we're loving the adorable results.

Norri casually attended ballet class in a custom Balmain blazer. And the award for chicest toddler ever goes to...

Here, North West reminded you that she was ahead of the slip-on-sneakers-that-are-still-stylish trend before you even thought about it.

Kim and North adorably matched (as they tend to do) in black lace on the way to the Givenchy show during Paris Fashion Week.

Of course Kanye couldn't resist a shameless plug. North's pint-sized Yeezus bomber is the trend on everybody's spring jacket radar and her sweater pants are Céline. Cool, she'll grow out of those in two months, but WHO CARES?

North had a pretty great view during fashion week—and with great seats comes great responsibility, so Norri kept it chic and simple in this all-black outfit. (It's also clear that she made Dr. Martens the Manolo Blahniks for babies.)

The perfect white dress is an Easter staple and North had one of the best in this graceful, satin frock. And just when we thought we were over flower crowns... 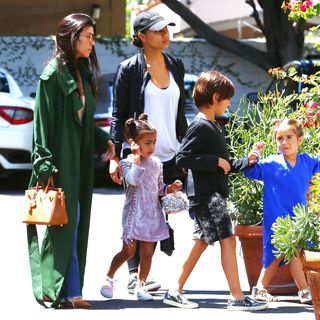