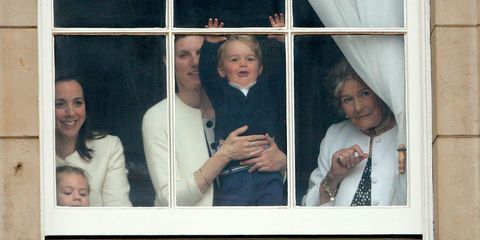 In Prince George's family tree, there is a history of adorable tourism. There is also a history of so much sass. As future ruler of England, he has inherited both in great quantity, which is evident in, oh, every single photo he takes. Won't you join us in admiring his cheekiness? Also, do you know if Will and Kate are looking for a sitter? Because we could totally do that.

It's his "first day at nursery in Norfolk," and we are officially old. #datbackpack

And here he is pointing at a mural and displaying any signs of separation anxiety.

"And that, Gwanma, is why I would not have chosen to wear that hat with that outfit today."

Between the hand-holding, the peering-at-his-baby-sister-ing, and the overall squishiness, how can I be expected to do anything except cry/stare at this all day?

Isn't he the best?

Beyoncé-level side-eye or searching for an escape route? We will never know

This is the setup for that pic, and it is *so* sassy.

Then he chewed on some Australian paper, and they were still like, "Awwwww! Come back soon, guys."

Ugh. If only he could report back on what Kate's hair smells like.

Technically, he doesn't have to share, though I'm sure if she asked nicely, he would because he is bound to the codes of chivalry.

Even at three months old, he already had the "get me out of here face" down cold. Just imagine how fondly Kate will look upon this photo when he's a teen plotting to get out of a state dinner to go play Spin the Bottle or something.

Next
To Celebrate the Most Hideous Travel Day of the Year, Here Are 14 Celebs Struggling at the Airport 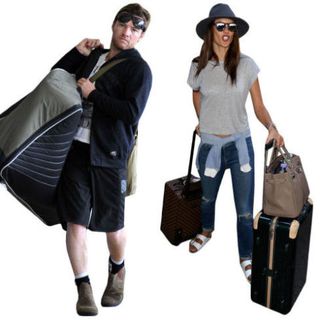