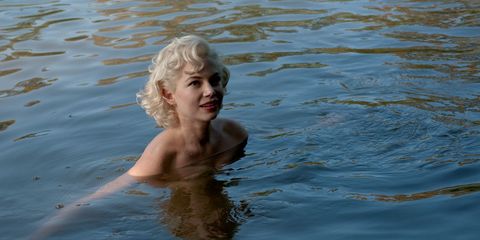 Probably because there does seem to be a strong-ish inverse relationship between degree of transformation and number of Oscars, Extreme Role Preparation has become something of a sport amongst actors. Who can change her appearance the most drastically? Who can learn a new skill? Who can seclude himself in a hotel room for a month with no company except a diary? (And you thought staying until 7:30 p.m. to finish a report was dedication.)

This is such an OG metamorphosis and performance that "Charlize-ing yourself" practically became a verb. The pro salary negotiator gained 30 pounds and wore facial prosthetics, two moves that translated into three big awards: a SAG, a Golden Globe, and an Oscar.

Note to self: If ever cast as consumptive prostitute, RUN. For the first part of the Tubercular 19th-Century Sex Worker Diet, Hathway went on a cleanse. Minus 10 pounds. For the next 15, it was "two thin squares of dried oatmeal paste a day." Hathaway did call the whole process "a little nuts," but nothing tastes as good as an Academy Award feels, maybe?

Playing Marilyn Monroe is a BFD, so Williams listened to interviews for months to get the breathy voice down, sat through three hours of makeup every day, and used a belt fastened around her knees to get the wobble exactly right."There was a sort of a sense of a figure eight to her walk. It looked like she had a balloon attached to her breastbone. Her nipples were always pointed up...That was the work that I wanted to start as early as possible, because I don't want any of those thoughts to be anywhere in my mind when I'm in the middle of a scene," she told CBS.

To look like one of those sad Jesuses from medieval art, Bale lost more than 60 pounds subsisting on "water, an apple, and one cup of coffee per day, with the occasional whiskey," according to the biography written by his former assistant. This was all because the much-shorter writer forgot to adjust the character's weight description for Bale's 6-foot frame. (He still wanted to do it after he found out, though.)

If Daniel Day-Lewis had ever let himself be photographed with cell phone in hand, we might have witnessed the birth of a meme: Texts with Abraham. In a 2012 interview, Sally Field, who played Mary Todd Lincoln, revealed that she never even met DDL—instead, her onscreen husband stayed in character throughout filming, even while texting her. (Don't ask me how Honest Abe would know how to operate a QWERTY keyboard.)

Kate Winslet can tell you how hard it is to leave your work at the office. Her two children "got mightily fed up with [her] reading bedtime stories with a German accent" so she could practice for her Oscar-winning turn as an illiterate concentration camp guard.

Speaking of areolas, Mara really had hers pierced to portray Lisbeth Salander, which must have been quite a commitment, given that pre-GWTDT Rooney Mara had quite a pink, velvet-headband aura—plus un-punctured ears.

Everybody knows Portman and Kunis each lost the equivalent of a toddler each to play professional ballerinas. But combine that with grueling eight-hour dance rehearsals begun a year in advance, and you're like, "How did you even stand up, let alone fouetté en tournant?"

Gosling and Williams so fully immersed themselves in filmmaker Derek Cianfrance's world that Gosling said he forgot he was making a movie. He, Williams, and their onscreen daughter lived together as a real family in their characters' house for one month, celebrating fake Christmas and birthdays "so that when it came time to shoot the [last] part of the film, we were drawing on real memories," Gosling said.

"I sat around in a hotel room in London for about a month, locked myself away, formed a little diary and experimented with voices—it was important to try to find a somewhat iconic voice and laugh. I ended up landing more in the realm of a psychopath—someone with very little to no conscience towards his acts. He's just an absolute sociopath, a cold-blooded, mass-murdering clown," he told Empire Magazine. Ledger's father has said that while his son liked to "galvanize upcoming characters," he really "took it up a notch" preparing for the Batman film. Chillingly, the last words at the end of his Joker diary read "Bye, bye." 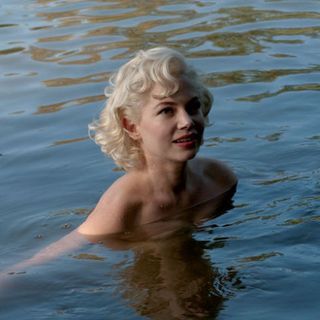 Advertisement - Continue Reading Below
Chelsea Peng I'm Chelsea Peng, the assistant editor at MarieClaire.com.
This content is created and maintained by a third party, and imported onto this page to help users provide their email addresses. You may be able to find more information about this and similar content at piano.io
More From Celebrity
Princess Eugenie's Son Got to Meet Prince Philip
Ashley Graham Is Having Twin Boys
Advertisement - Continue Reading Below
Gabrielle Union Danced Topless at a Window
Ben Affleck Is "in Awe" of Jennifer Lopez
Princess Beatrice Has Given Birth to a Baby Girl
Gigi Hadid's Mom Shared Sweet Pics of Khai
Kate & Will Probably Won't Have a Fourth Child
Ben & Jen Plan to Spend the Holidays Together
Kate & Will Are "Anxious" About Harry & Meghan
Mandy Moore Calls Breast Pump Emmy's MVP Accessory