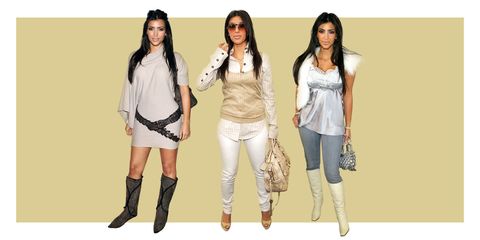 When she isn't trolling Bette Midler with nude photos, Kim Kardashian can be found wearing Yeezy sneaks and kickin' it in Balmain. But before Kanye West replaced all her clothing with soft pink latex, Kim was cutting a slightly less stylish silhouette.

The good news is that Kim's Pre-Kanye wardrobe will forever live on in our memories, by which we mean the internet. Click through for a sartorial flashback—unless your name is Yeezy, in which case run away.

This seems like a totally reasonable size for hoop earrings, no?

Kim had just returned from the prairie that is Calabasas.

Whatever, this outfit is perfect.

In the words of Doge, "such concern."

Because it was cold and designer capes weren't in yet.

If you close your eyes, perhaps that boot will go away.

Channeling her inner 2 Chainz in the most literal way possible.

Nothing pulls an outfit together like a slightly sheer tan vest.

Kanye traveled back in time and sent a subtle message to Kim's outfit via press wall.

*That moment when your pillowcase gets confused and thinks it's a shirt, but you still look flawless because you're Kim Kardashian*

Let's take a moment of silence for the loss of this glorious outfit, which we can only imagine Kanye burned.

That peace sign is slightly ironic, given that Kim's outfit is clearly at war with Kanye's eyeballs.

This seems like the appropriate amount of neck ruffles on a dress, right?

Guys, look how excited Kim is about her pin-stripe romper!

To be fair, she still wears leggings as pants.

For those times only one of your arms is over-heated.

Possibly the least Kanye outfit Kim has ever worn.

Kim was super cold everywhere except the tips of her fingers.

Next
Mary-Kate & Ashley Olsen: See A Photo From Every Year Of Their Lives 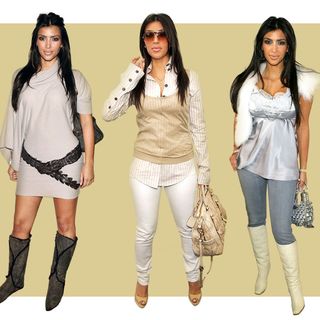 Advertisement - Continue Reading Below
Mehera Bonner Contributor Mehera Bonner is a news writer who focuses on celebrities and royals.
This content is created and maintained by a third party, and imported onto this page to help users provide their email addresses. You may be able to find more information about this and similar content at piano.io
More From Celebrity
Serena Gave Daughter Olympia a Tennis Lesson
Meghan Shared What Helped Her Through 2020
Advertisement - Continue Reading Below
Kylie and Travis Are "Very Close" After Reuniting
Meghan's Book 'The Bench' Tops Best Sellers List
Kaavia Talks to a Bee in an Adorable IG Video
David Harbour on Being Stepdad to Lily Allen's Kid
Ben Affleck Is "Getting to Know" J.Lo's Kids
Salma Hayek's Owl Had a Mishap With Harry Styles
Princess Diana Always Dreamed in Living in Cali
Angelina Jolie Was Spotted Leaving Her Ex's Place