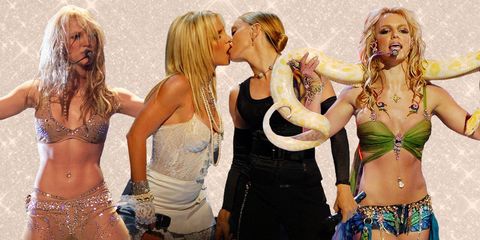 Not a drill: Britney Spears is performing "Make Me..." with G-Eazy at MTV's Video Music Awards on August 28. Long-time VMA fans (👋 👋 👋 ) know that Britney's headlined the show several times, but it's been almost ten years since her infamous performance of "Gimme More" in 2007. But y'all, 2016 is the year of aughts nostalgia, so we're expecting some epic things from her VMA resurrection. Here's what to look out for.

1 of 7
NSYNC (Seriously, How Amazing Would That Be?)

Okay, we know it's a long shot, but think about it: NSYNC joined Britney on stage for her very first performance in 1999, where she sang "Baby One More Time." Plus, the boy banders just reunited for JC Chasez's birthday. Is it too much to hope they'll help a homegirl out at the VMAs? NO, IT'S NOT.

A Britney VMA appearance just isn't complete without a giant ear-to-mouth microphone. Double points if it's bedazzled. Triple points if a fedora is involved.

Britney Spears is the queen of nude glitter ensembles, and the one she wore during the 2000 VMAs broke the internet (despite the internet already being broken due to #DialUpProblems).

4 of 7
A Totally Boundary-Breaking Performance

Britney shattered all kinds of taboos when she kissed Madonna on stage during the 2003 VMAs. Their smooch wouldn't be a huge deal in today's far more tolerant climate, but this was five full years before Katy kissed a girl and liked it, and even *that* was considered controversial.

If there are no live snakes slithering their way through this show, there is just no justice in the world. Watch Britney's circa 2001 VMA performance of "I'm a Slave 4 U" and you'll get it.

The approach to set design in the early aughts was basically: the more theater nerd prop vibes, the better. In 1999, we were gifted a full high school classroom. In 2001, we were blessed with a foggy jungle. Considering the theme for Britney's "Make Me" video is best described as "hipster Seattle coffee shop," we expect big things.

It's hard to talk about Britney's circa 2007 "Gimme More" performance, mostly because it went down during an extremely difficult time in her life when she giving, well, a bit less. The performance was all anyone could talk about for months, so Britney will presumably head into Sunday's show ready to redeem herself.

Next
Celebs on the Weirdness of Dating While Famous 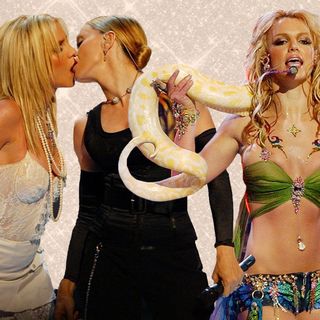